We get this question all the time! Where are the most LGBT-friendly towns in NJ?

When Randy Rabney and her wife, Fran Lichtman, decided it was time to pack up their lives in Manhattan more than a decade ago, they only had one New Jersey town on their list of possible destinations: Maplewood.

As native New Yorkers, Rabney said they drove to the town "to rule it out," never expecting to take the plunge into the New Jersey suburbs, but the couple quickly decided that's the place they wanted to raise their son, who was two and a half at the time.

"For us, what we were looking for was a community where we could truly be integrated into the fabric," Rabney said, a place where people would look at their son and say, "There's Zan," not, "There's that Jewish boy with two mothers."

For them, Rabney said, Maplewood — and neighboring South Orange — has been that community.

While the Garden State is not home to historic gay meccas like the Castro District in San Francisco or Chelsea in New York City, there are towns throughout the state that many describe as havens for LGBT — lesbian, gay, bisexual and transgender — people and families. Though there has been considerable progress in recent years, LGBT issues are still at the forefront of political discourse, and gays don't necessarily feel comfortable in every community — even in one of the most diverse and left-learning states in the nation.

Towns like Maplewood, South Orange, other suburbs of New York City, some Jersey Shore communities and the state's second largest city, are particularly welcoming to the gay community and particularly progressive on issues affecting that community, residents and activists say.

The diversity of the LGBT community makes compiling a definitive list of gay-friendly towns in New Jersey a difficult task — as each person places different priorities in choosing a place to call home — and a comprehensive analysis of how the hundreds of municipalities in New Jersey stack up against one another on LGBT issues does not exist.

But when determining a town's friendliness toward its LGBT community, Christian Fuscarino, the executive director of Garden State Equality, said public displays of gay pride, including flag-raising ceremonies, show the municipality is "proactively inclusive of their LGBT residents."

Hoisting a rainbow flag high in the air in front of City Hall, however, is just one of many actions Fuscarino would consider when rating a town on this topic, adding that he'd also factor in whether the town had established an LGBT police liaison and provided equal health care benefits to LGBT employees.

Fuscarino believes the same community would take top honors if a New Jersey-centric ranking were done.

"I think Jersey City probably takes the cake when it comes to being the most friendly LGBT town," he said.

Beyond the city's large population of LGBT residents, annual pride festival and community center dedicated to LGBT people, Fuscarino pointed to efforts spearheaded at the municipal level to embrace the LGBT community.

None of the 12 New Jersey cities included in the Human Rights Campaign's Municipal Equality Index, scored as high as Jersey City, though Lambertville came close, with a score of 98 out of 100.

Asbury Park received the third-best rating in New Jersey from the Human Rights Campaign, with a score of 83, followed by Princeton at 74. Ocean Grove, Trenton, New Brunswick, Newark and Elizabeth each received scores between 60 to 70, while Hoboken and Paterson fared the worst among the towns rated, with a score of 51 and 48, respectively.

The average score, nationwide, was 55. Scores were capped at 100, even if towns scored more than that amount with bonus points. 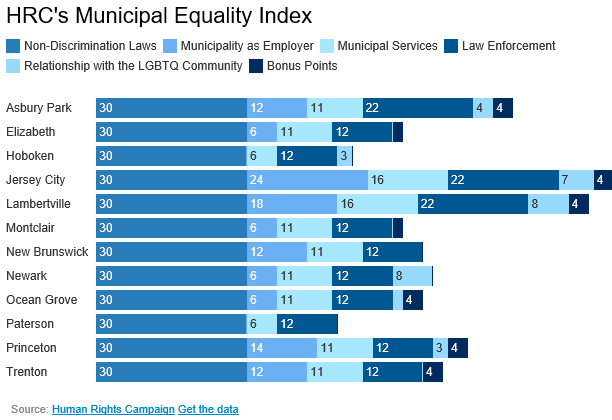 Paul Amatuzzo, a lifelong Jersey City resident and a real estate agent with Armagno Agency, said gay people, like himself, are attracted to Jersey City because they want to be "able to live the life that we live and not be ridiculed."

"Jersey City has proven to be a great place for gay people to live because it's very accepting and it's always been a diverse city," he said.

Amatuzzo also identifies Asbury Park, where he owns a home, as an "extremely gay-friendly" town and one that celebrates the LGBT community every year at Jersey Pride, an annual parade and festival that marked its 25th year this summer.

The Jersey Shore town has a history of gay bars and clubs going back to the 1970s and an active gay business community today, said Amy Quinn, the deputy mayor of Asbury Park. She noted that city officials authorized a marriage between a same-sex couple in 2004 — nine years before gays and lesbians would legally be allowed to wed in New Jersey.

"I have never lived in a town that has been so welcoming to the LGBTQ community," said Quinn, who married her wife on the boardwalk in Asbury Park in one of the first same-sex weddings performed in New Jersey.

Other Jersey Shore communities, like Ocean Grove, Atlantic City and Cape May, are known as welcoming to the gay community, as are suburban communities like Montclair, Plainfield and Princeton. The LGBT-interest magazine The Advocate earlier this year listed Edison — the home of New Jersey's Lesbian and Gay Havurah and gay-friendly Temple Emanu-El — as one of the queerest cities in America.

The federal government doesn't survey people about their sexual orientation or gender identity as part of the Census, making it difficult to determine where the largest population of LGBT residents reside. The Census does, however, track same-sex couple households by state and found 16,875 same-sex couples were living together in New Jersey in 2010.

The Williams Institute, a think tank at UCLA Law that conducts research on sexual orientation and gender identity law and public policy, analyzed the Census data to determine the cities in New Jersey with the largest number of same-sex couples per 1,000 households. Ocean Grove topped the list, followed by Lambertville, Asbury Park and Collingswood. Montclair, Plainfield, Brookdale, Highland Park, Jersey City and Metuchen filled out the top 10.

While Maplewood and South Orange weren't included on that list, residents there say that lesbian and gay families are completely enmeshed in the community. Rabney — who works as a real estate agent with her wife for Lichtman-Rabney Group at Keller Williams Mid-Town Direct Realty — said, "people are coming here because they want to be in a community where they can just be who they are."

"We want nice houses that we can afford. We want a community that's open minded. We want schools that are good for our children," she said. "All of those things make it LGBT friendly because it's people friendly."

Go back | Show other stories | Send this page to a friend