We found out, very much after the fact, that Randy Kowalik, known to us as both bloggers Cousin Butchie and Uncle RJ, passed away November 6, 2020. He was our most active blogger by far as well as one of the founding members of PFLAG North Jersey. He will be missed.

Submit Comment
Go Back
Thursday, October 22, 2015
How many anniversaries are enough?
Posted by Bonnie Kantor

This morning, Facebook reminded me that on this day two years ago I posted the picture on the left with the caption: At Metuchen Boro Hall this morning, applying for our Marriage license. Our good friend Laura was our witness.

On November 10th, the love of my life and I will celebrate two years of legal married bliss here in NJ. It will also be the 25th anniversary of our first wedding in 1990. That was at our beloved Temple Emanu-El in Edison with Rabbi Landsberg and about 100 of our familiy, friends, and co-workers (see us in our 1990s splendor below, right). A pretty big deal for us. 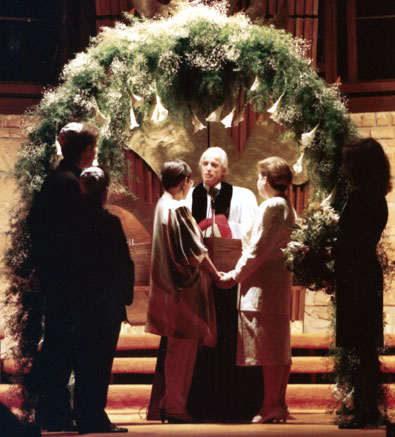 Our commitment to our relationship includes lots of anniversaries: the day we met, the day we realized, first kiss, the first wedding, domestic partnership, civil union and then legal marriage. It made me think, not for the first time, about all of these anniversaries we celebrate, or at least remember, with or without the prompting of Facebook. Yes, the road to equality was long and winding and we took each step that came along, each time thinking we had reached the place that would be "it". After our small, intimate wedding two years ago, we said "Finally, the last wedding we need to have. We are really married." Of course, this summer the Supreme Court made it portable to all 50 states. Another step.

I know, because I compare notes, that many LGBT couples take note of many, many anniversaries--not all jewelry occasions, by the way. Is this true of all couples? Even non-LGBT ones? I was married to a man earlier in my life and I don't remember keeping track of all those special moments. Maybe they weren't that special in that relationship. What do YOU think? How important are ALL the dates along the way for you and your special someone?

By the way, I am totally loving calling Linda my wife! It makes the rest of any conversation so very simple. Instant recognition. Happy legal marriage anniversary to all of us in NJ!

We received this note and picture from one of NJGayLife.com's long-time visitors, Gary Wyssling. Thanks for sending this, Gary!

I had the privilege of seeing the Pope in Central Park. I will admit that I am a frustrated Catholic and feel the church does not include my community as a gay man, but to be given the opportunity to see this MAN was something I didn't want to miss. I am a deeply spiritual person that continues to pray for those around me and myself. I stood in line with my sister and a friend and we were able to share many moments with the people from New York and the area. This experience transcended color, race, religion, language, sex and sexual orientation. Those People who stood with strangers and waited for hours waiting to see a glimpse of the Pope became small communities of hope, peace and love for all. We left with a renewed hope that the world would be a better place. We hugged, kissed and shared phone numbers to share photos. Not sure who else could have created this amazing healing amongst people. The energy of love and peace was so strong that I felt a healing and understanding for all of God's children.

This man is changing HISTORY for the Catholic Church and Mankind by being inclusive, loving and understanding of all of God's children. Let us continue to pray for the world where love of all God's people is the norm. 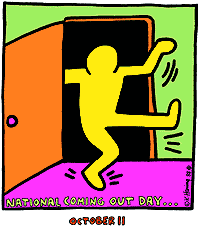 Today, October 11th, is National Coming Out Day. It got me thinking about the many steps to my coming out and how it is today. I was in a non-gay marriage for 15 years and had a 5 year old when it finally became clear to me that I was living a lie. So, the first person I came out to was me, pretty quickly followed by some close friends--none of them close or friends today--and my then-husband.

I set a time to meet with my parents to tell them about my upcoming divorce not about coming out. My dad looked at me and said, "You think you're a lesbian?" My response was "Good guess!" When I asked how he knew, he told me I was his kid and he knew in the same way he knew my eyes were green. And I thought I was doing so well in that deep, dark closet.

Anyway, that was way easier than I ever imagined. Turns out, my parent were just waiting for me to make this announcement. Years and years later my aunt told me that my father had asked her when I was still in my teens if she thought I was gay. Wish they had let me in on their suspicions.

My whole family knew in less than a few hours as my father called everyone to share the news. Never saw that one coming. He was actually proud that I was happy and moving forward. Since so many in my circle already knew, it was time to let my little boy in on the truth. He was 7 going on 40 at the time and has been a huge supporter from day one. I told him he could tell (or not) anyone he wanted. I also knew that telling him set the absolute rule that within our home truth would always be the norm.

Since those early days, I've come out to employers, clients, ever larger circles of colleagues. I've spoken publicly, been in the press and on the radio. Coming out feels like a non-issue until I hear the question, "What does your husband do?" My answer now is "Don't have one of those, but my wife..." Took a while to get there, though.

Within less than 10 minutes of meeting a new acquaintance, I generally let them know that they are talking to a real-live lesbian. My reasoning is that I want to like most folks and I don't want to hear them say something really dumb. At least not without knowing who they are talking to. I get less and less "some of my best friends..." and more "oh..." these days.

So, who will I come out to today? Not sure, but there must be someone. I'll look for an opportunity.

How about you? Can you make a decision to tell someone about who you are today? It has been documented that when someone knows a GLBT person, they are more likely to be supportive of our issues and rights. That translates to votes in favor of issues important to our lives. Once they know one of us we are no longer a concept, we become people. And that's what National Coming Out Day is all about. 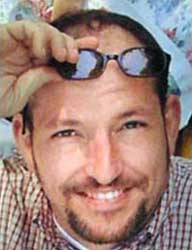 As I watch the reading of the names on this 10th anniversary of the horror that was 9/11/01, I am as raw as was that day. The people we remember today were at work or traveling somewhere. It was just a day until it wasn't.

Through my tears and my aching heart, I remember the way I felt as events unfolded and I can't even imagine the pain of the families standing at the memorial today. In addition to these families are the ones who have the blessing of survivors and injured--physically and mentally--whose lives are also forever changed by that day.

And those who were in the city that day and felt what seemed like an earthquake. The phones didn't work. The cell phone lines were shut down. No one could leave.  Everything stopped.  But the Internet was up. My partner, Linda, and I were sending emails all day about what was going on. Every bright, clear, beautiful fall day she says, "It was just like this that day. It makes me totally anxious."

Who of us is unaffected by that day? Unchanged?

That week,  I went to services at Temple Emanu-El in Edison and was asked to choose a piece of paper from a basket. Each slip of paper had the name of one of those who perished. Of course there were more slips of paper than attendees at the service, but each of us chose a name to focus on during the service.

I was amazed when I looked at the name on my paper. It said Mark Bingham. He was one of the heroes on flight 93 near Shankesville, Pennsylvania and he was gay. We all knew that. It was all over the news. And I had him in my heart that night during the service and the special prayers.

I had him in my heart long after, too. I kept that slip of paper. For a long time, I kept re-finding it in the pocket of the jacket I had on that night. Now it lives on my bulletin board.

Today is the 10th anniversary of that day, but every day marks the change in each of us and in all of us, as individuals and as a nation. I remember and mourn with all of you.

Submit Comment
Go Back
Sunday, May 22, 2011
A Brand New Day
Posted by Bonnie

I am the creator of NJGayLife.com and I'm proud to announce the new website. The latest version of this site is more informative, more attractive and will, as always, have the best information about what is going on in the Garden State. Hope you enjoy the new features. Sign up for our email list to stay up-to-date. "Like" us on Facebook and follow our tweets on Twitter.

This morning, as the site is about to re-launch in this new format, I'm having that "coming out" feeling. I've known about these changes for months, been planning the changes for more than a year. I have had the "aha" moments as each piece fell into place, especially as the bloggers agreed to add their voices to the site. AND it's been a secret! I have mentioned that the new site is coming and I have hinted at it in several forums, but now it is here full-blown.

You get to digest all this newness in one fell swoop. You didn't live through my angst and fear as I made this step forward--kind of the way I felt when I finally came out. So, I hope you will take the time to absorb the vastness of this change--for me and for each of you who depend on this site. Hope you love it as much as I do.

See you at the Pride Festival in Asbury Park on June 5th! Stop by and say "hi"--we have a little something for you.