Bumpers, Part 3 - A Picture That Bumped Me 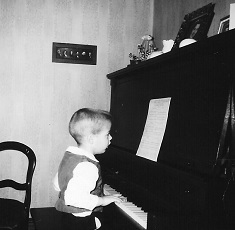 I love to play the piano. I can’t remember a time before I played the piano and apparently I come from a line of piano players. When I started playing the piano around age 4, I only knew that my sister was taking piano lessons, that my mom sort of played the piano, enough to help out her singing, that my uncle, my father’s brother, played the piano a lot, and that my grandmother, my mother’s mother, had a big upright piano in her parlor. I don't remember anyone playing it, though.

When I started playing the piano, my grandmother would let me go into her closed-off parlor and play. It was always cold in there. Freezing in the winter. The piano was huge. It was an upright, twice as tall as I was. The keys were covered in real ivory. It was always slightly out of tune. To the left of the piano hung a small picture of several composers. I don’t know how old it was. I imagine it was there for most of the time since the house was built in the 1880’s. 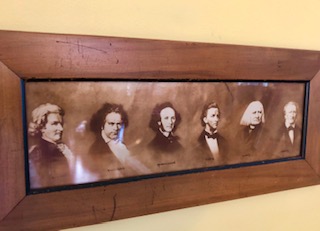 I didn’t know until after my grandmother died that she played the piano in the church across the street, the church my parents were married in. Little did I know when I was four that I would follow in my grandmother’s steps as a church musician. After my grandmother died, and the family was distributing and selling her possessions, my family contacted me and told me that my grandmother wanted me to have the piano. This was impractical, since I already had a piano, and transporting this huge antique from Ohio to New Jersey was prohibitively expensive. I asked if I could have the picture. My parents took it and sent it to me. It now hangs next to my piano, in the same position it was at my grandmother’s house, to remind me of the connection I have to my musical ancestors. It served to bump me into practicing when I was young, and bumps me to this day to remember my mother who certainly played this piano many times, to my grandmother, who I never heard play the piano, and to any other of my relatives who may have played this instrument, sitting under the watchful eyes of Mozart, Beethoven, Mendelssohn, Chopin, Liszt, and Wagner. I only regret that the picture didn't include Amy Beach, Fanny Mendelssohn and Clara Schumann. 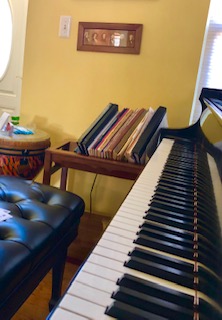