The Hairy Vegetarian in Riga, Latvia 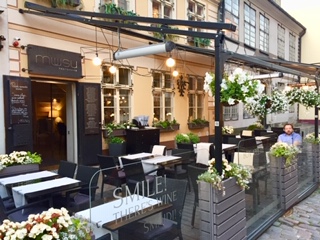 On our first night in the lovely city of Riga, Latvia, Joe and I set off on the short walk to the Old City to find a restaurant. We turned the corner past the TGI Friday’s and saw a rather empty terrace at a restaurant called Muusu. We sat at a table on the sidewalk and ordered wine. My appetizer was a caramelized goat cheese bouchée. The base was chopped eggplant and pine nuts. The sauce was balsamic fig. I could have eaten more, it was so good. We enjoyed watching the many local people and tourists pass by our table. A live band was playing across the street. Their sound system was unbelievably good. It was rather cold that evening, even for the Baltic states. Electric heaters radiated their fugitive warmth, but it didn’t help.

My entree was a green pea and asparagus stew made with pearl barley, hard truffle cheese, spinach, and sun-dried tomatoes.  The ends of the asparagus were left long while the bases were peeled and chopped. They gave an interesting crunch to the texture. Once again, I was delighted at how good the vegetarian options were. The ingredients must have been given much thought as to flavor, texture, and nutrition.

For dessert I got a Michael Cluizel chocolate cream cake. It had chili threads and vanilla bean sauce. I’m glad I took the plunge and got it. The flavor was rich and dark, and the texture, thick and creamy. If you chewed on the threads for a while the chili flavor came out in all its glory. I was so cold I had to wrap myself in the blanket that was draped over one of the chairs. But I was a happy vegetarian. With my dessert I ordered a tea. I usually don’t. I don’t drink anything with caffeine after about 2 in the afternoon, otherwise I won’t sleep. But I really wanted something hot. I ordered a lemon mint tea, expecting to get a bag and a mug of hot water, the way I usually do at home. The waiter brought the desserts, then a rather large, bulky teapot and a tea cup. In the pot, immersed in the water was a big basket filled with peeled chunks of ginger, several lemon wedges, and several whole mint leaves. With the tea was served a small cup of raw honey. This was the best surprise of the trip. I enjoyed it not just for the heat it provided.

I had to stop by this restaurant two more times the next day because I left my hat there after our meal. The staff kept telling me that they were trying to find out where it was from the cleaning crew. But they never found it. Somewhere in Latvia someone is walking around with a black cap with “Ireland” and a harp on it.  More about the hat saga in another post.

For lunch one day several of us went to an Armenian restaurant where I had eggplant rolled up in goat cheese and walnuts. Another dinner was at an Uzbek restaurant called Uzbegims, near the hotel. I had beet soup that was hot, served with sour cream. Joe and I shared a pastry with pumpkin inside. It was so hot it took several minutes to cool enough to eat. It was good once we got to eat it. I also had three dumplings filled with cabbage, onions, and carrots. They were light as air with wonton thin shells.