The Hairy Vegetarian in Tallinn, Estonia 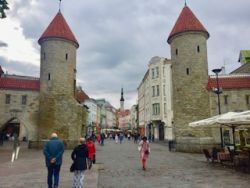 After breakfast on the boat from Stockholm, we landed in Tallinn, Estonia. We went on a guided tour of the old town, then headed for lunch on Raekoja Square at a restaurant named Kaerajaan, with outdoor tables under a canopy. Joe and I both had the puréed beet soup which I now have to find out how to make at home. I love beets. This soup was cold and so good. My entree was a pumpkin risotto layered on a portobello mushroom with arugula and goat cheese. We sat watching locals in native dress dancein a circle to live Estonian music. It was cloudy and cold, especially for July. On my chair was a fuzzy animal skin to keep me warm. Overhead was a heater that the waitress aimed at my head. I kept wondering what it must be like here in the summer, but then I remembered that it was July.

That evening we first tried to get into a restaurant that had been recommended by a friend who had just been to Tallinn on tour with the Rutgers Glee Club, but they were full. They sent us down the street to a brasserie called Tabac. Out in front was a loud group of British soccer fans singing God Save the Queen, since England had just won a World Cup game minutes before. Our waiter, Sebastian, provided us very entertaining help with our orders. We thought he was American because of his accent, but it turned out that he was Estonian, and had lived in California for a few years. I had a tomato tartlet with eggplant, mozzarella, and basil as an appetizer that was small and fragrant. The main course was the best I’ve had so far, which isn’t easy for me to say. It was a marinated segment of pumpkin that had been grilled and covered in peanut butter. Green beans and ramson (a type of garlic) salsa verde covered the top. This combination seemed odder to me than honey and pickles, but it was very good. Three other meat eaters at the table had this dish as well, and raved about it. For dessert several of us shared their two desserts: a sticky date pudding with white truffle stracciatella, and rhubarb and ricotta with an oatmeal cookie and vanilla ice cream. The tart sourness reminded me of the rhubarb dishes my mother and grandmother made. I love rhubarb, and appreciate it for its unique, sour taste. I dislike when people try to cover the flavor with excess sugar and other fruits. Not everyone liked the truffles, so I got to eat a good deal of that dish. Sebastian said if we didn’t like it, he would eat it. There was none left for him.

I have to say that I was beyond surprised and very happy with the plight of a vegetarian in Estonia.