Bumpers, Part 1 - An Album That Changed Me 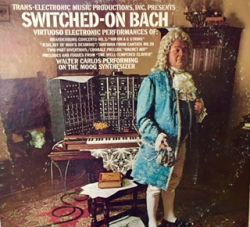 Have you ever played pinball? Usually in a pinball machine there are round bumpers. When the ball hits one of these bumpers, the ball is propelled rather quickly in a new direction. The direction could be good, resulting in points, or it could be down between the flippers and the ball is out of play. Life has bumpers. We go along like the ball, trying to rack up points, and often hit a bumper that propels us, perhaps further down the path we were headed, or perhaps in a completely new direction.

I’m going to try to remember the bumpers I’ve hit. One comes to mind. It’s an album that I fell in love with early in my life, that I believe bumped me in a significant way, to be the person, the musician, that I am today. This album is Switched on Bach.

Switched On Bach is an album of music my Johann Sebastian Bach (1685-1750) performed on the Moog Synthesizer, an early electronic keyboard instrument, by Wendy Carlos (known then as Walter) and Benjamin Folkman, released in 1968. Electronic music at that time was mostly experimental and avant garde sounding. The keyboard music of Bach, in the 60s, was mostly performed on the piano or organ. I’m not certain exactly when I got the album, but I was around 9 or 10. I had been studying classical piano for a few years, playing Bach, Mozart, and other classical composers. I can’t say I was ashamed, but I didn’t go around telling people that I liked classical music. I liked it a lot. I liked some popular music, but I couldn’t go around telling people that I liked classical music much more. I would play it at home on the piano, and occasionally in church or somewhere like that. I’m sure some of my friends thought it was cool. Maybe it was just the others who took piano lessons. But I was pretty quiet about the subject in general circles.

Then came SOB. (Switched On Bach). My mind lit up. I remember listening to it on my record player (remember those?) in my room. Over and over. Here was intricate classical music performed with these rich, wacky, weird, delightful, electric sounds. It was the coolest thing I had ever heard. This album united what I loved about the piano with everything that was neat and cool and above all, shareable with my friends. I could say I was a part of something that was really, really cool.

After that my study of classical music took on an energy and life that was new, vibrant, and headed in a definite direction. I knew I was going to study this thing called music and make of it something intensely important. I had been bumped. And I racked up a lot of points.