My name is Clark Daugherty, Owner of Dreams Ahoy Travel, LLC. I have recently joined NJGayLife as an advertiser. One of my objectives when I joined was to be a source of information for LGBT Friendly Travel. In pursuit of that objective, I wanted to start and develop this blog on subjects and issues that would be of interest to the LGBT Traveler.

There are a myriad of topics to cover. But I thought I would start with some of the best destinations for travel. I will introduce many destinations one at a time. Let’s start with Europe. Europe is a fantastic destination for any traveler, but is especially so for the LGBT Traveler. We will explore Europe over the next few Blog entries, but will start with one of the most popular destinations, Germany.

Situated in the heart of Europe, Germany is the center of gay Europe and is a perfect “Jumping Off Point” for your European Vacation. The LGBT community in Germany is an important part of society and enjoys some of Europe’s most advanced rights for gays and lesbians. Well-organized and lively LGBT communities are common in all major and many small-sized cities and numerous gay events take place throughout the year, peaking with the annual pride parades (in Germany known as Christopher Street Day Parades). In Germany, the gay traveler gets to experience a wide variety of cultural attractions, vibrant cities, natural beauty and a well-integrated LGBT scene. 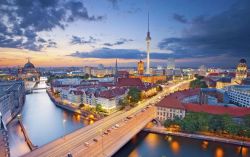 The German capital is one of the largest gay metropolises in Europe. The dynamic and diverse LGBT scene contributes to the city’s culture and vitality. The neighborhoods Schöneberg, Kreuzberg, Prenzlauer Berg and Friedrichshain have become trendy and hip not only with gays and lesbians but with artists, young and creative people. The majority of gay hotels, bars, cafés and shops, as well as a legendary club scene are located in the Schöneberg district. Enjoy LGBT parties, street festivals and events throughout the year. While the architecture clearly indicates a change to modernity, the creative and inventive climate is what characterizes Berlin best. Art can be seen everywhere, on walls, in galleries and in alternative centers. Some of Berlin’s main attractions should not be missed, such as the Brandenburg Gate, the TV tower on Alexanderplatz, the Memorial Church, Gendarmenmarkt Square, the dome of the Reichstag and the Museum Island.

Cologne The historic city on the river Rhine, known for its 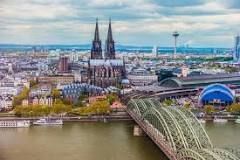 Cathedral (UNESCO World Heritage Site), has its very own joie de vivre. Though Alter Markt and Rudolfplatz, are known as the gay neighborhoods, gays are part of this cosmopolitan, gay-friendly city and are regarded as an integral part of Cologne’s society. The city is made up of cosy cafes and bars, where Kölsch, the local Cologne beer, flows constantly. Locals enjoy clubs, bars, restaurants and lounges in the quarters of Kwartier Latäng, Friesenviertel, Belgisches Viertel, Südstadt and Ehrenfeld. They are communicative, optimistic and tolerant and most of all: they love their city. You can sense this especially during the carnival season when the whole city celebrates and has fun! Enjoy Cologne’s many museums, the Art Cologne exhibition and the lively art and music scene. Aside from Christopher Street Day, the highlight of the city's event calendar is the WomenPride festival. Both are part of the annual Cologne Pride festival, one of Germany’s biggest gay pride parades.

Munich The LGBT community in Munich is very active and the 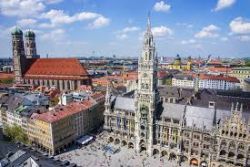 event calendar stretches from a Rose Monday gay ball to the Gay Sunday during Oktoberfest, before all gays and lesbians get together for Pink Christmas in the Glockenbachviertel – the heart of LGBT Munich. Most of the gay cafes, bars and shops are located here. The annual celebration has party after party, including a blowout at the historic city hall and a parade through the gay neighborhood and a street festival at Marienplatz. The international art and culture metropolis is situated close to the Alps in the South of Germany and a good starting point for skiing, excursions and visiting many historic castles. There are plenty of options for recreation and outdoor activities along the Isar river and in the foothills of the Alps. The beer gardens, open from spring to fall, are a common part of Munich’s lifestyle. 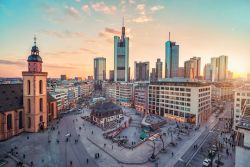 “Mainhattan” due to the adjacent river Main and the skyscraper skyline that reminds viewers of Manhattan. The city is multi-cultural and international due to the high density of international businesses and offers fine dining, shopping and impressive galleries. The Römerberg Square and the old town hall are the center of historic Frankfurt. Get up the Main Tower to get the best panorama of the city. Frankfurt’s LGBT scene concentrates around the “Bermuda Dreieck” (Bermuda Triangle), north of Konstablerwache, with Frankfurt’s most popular gay bars, coffee places and clubs. Several cultural places are worth a visit such as “Frankfurt’s Angel” at Klaus-Mann Square, Germany’s first memorial to gay and lesbian victims of National Socialism.

Hamburg “Live and let live” is the motto in Hamburg. With its 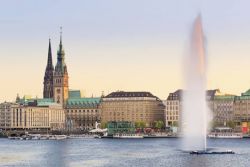 800 year-old harbor, which is perfect for strolls and sightseeing by boat, Hamburg offers a mix of old and new, modern and traditional. The natives love Hamburg for its abundance of water and the freedom that this implies. Hamburg is a very open-minded city which is why everybody feels welcome. The quarter of St. Georg with its many cafes and bars is the gay hotspot in Hamburg and the city is also famous for its Christopher Street Day and leather convention. A highlight for nightlife in Hamburg is the “Reeperbahn” with numerous clubs, shows and guided tours by Germany’s most famous drag queen Olivia Jones.

This is but a small taste of what awaits the LGBT traveler in Germany. There are many more adventures to be had there, including River Cruises, Guided tours, Etc. If you are interested in learning more about Germany, feel free to reach out to me at clark.daugherty@cruiseplanners.com or 609-556-9066.

Stay Tuned for our next destination, Denmark!!!