Liberty And Justice For None 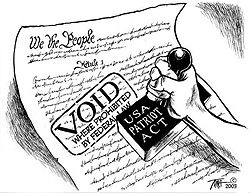 You can take away our right to privacy, and that’s okay since it’s for our own safety due to the Patriot Act passed after the Twin Tower Attacks. We need to separate church & state, but we added “One Nation, Under God” to our Pledge of Allegiance in 1954. We have the freedom of the press, but there are limited news outlets and they all cover the same news topics with a slightly different slant. But take our guns away and forget it! Why are Americans so defiant to cling onto this one right, whereas we’ve had virtually all of our other rights infringed on and nobody blinks an eye? The Patriot Act allows our own government to tap our phone calls, see what we are viewing on the Internet, and even know where we are located at any given point in time. This is not okay. Spying on its own citizens is not something you’d expect from a country like the United States. All of this occurred after fear was instilled in us that we could be attacked from within our own community, and it was for our own protection.

Following the Twin Tower Attacks on 9/11, there was a sense that traveling by air was no longer safe. When a man was found to have a “shoe bomb” at an airport, every U.S. citizen now has to remove their shoes every time boarding a flight at an airport and nobody seems to be bothered by this. All the additional hassle at airport security because of one incident. The promptness that put this new protective measure into place permanently because of ONE incident and it is legal, but we say it’s for our own safety so it’s okay. 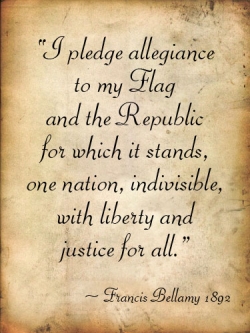 How many school shooting incidents have we had over the past decade or so? I haven’t seen anyone immediately respond to take measures to prevent this, aside from the left demanding stricter gun laws. Where were the “stricter gun law” people while we lost our right to privacy? Why were they not asking for the removal of the Patriot Act? Where were these people when we brought God not only into our schools, but allowing it to be instilled into all citizens of this country? Our founding fathers of this country believed there should be religious freedom and that all matters of religion and state should be separate and never intertwine. Those who do not know history or born after 1954, don’t realize the pledge did not originally have the word god in it whatsoever. Why was it added? They say to show patriotism and in respect of the flag and country, yet the underlying motives are up for debate. It was convenient that we changed the pledge during the Cold War when the atheist Communists was the enemy and we had to distance ourselves from that. A country founded on freedom from religion, now turned itself into a Christian nation.

Our news outlets are not free to say what they want, especially if it goes against its sponsors. The hierarchy shows that the news corporations cater to their own corporate sponsors, almost like the old TV shows in the 1950s where the advertisers had their product used right in the scene to be displayed subliminally, in order to encourage purchase. Why does every news outlet show the same news, just with a different viewpoint? We all see the same information in regards to the most recent school shooting, but where is the investigative reporting? Where are the Woodward & Bernstein of 2018? And of course, no school shooting is complete without the perpetrator committing suicide or being killed by law officials before any questions can be asked. What’s the agenda, the motive, the real reasons behind school shootings now more than ever?

Too often, we are taking what the media is feeding us at face value. Guns are part of our rights under the constitution, but are they higher up than freedom of speech, freedom of the press, freedom of/from religion, right to privacy, and all of the other rights we take for granted? What makes Americans hold onto the right to bear arms at face value and refuse to budge, yet allow themselves to lose much, much more. I don’t own a gun, but am thankful that I have that right should I choose to exercise it. But it’s too late for me to get back the rights already taken from all of us while nobody seemed to mind. The second guns are brought up, and we have both sides fighting over stricter gun control and background checks instead of what can we do to prevent another tragedy (with or without guns involved).

I do grieve and empathize with the families and children who had to endure the brutal massacres that have recently happened in the past few years, yet I don’t think stricter gun laws would change anything. What prevents a student or some other person to storm into a school with a bag full of machetes, knives or other deadly weapons that are not guns? Who will people blame, since it’s no longer the fault of a gun? I’m tired of United States citizens cherry-picking which of our Constitutional rights are negotiable, and which ones they will not budge on. I believe in this country and the Constitution. All 10 Bill of Rights need to be treated equally in importance and we should never budge on any of them, or else it opens the door for more deviation into a society that we were not built upon. At what point did we lose our life, liberty and pursuit of happiness?