Are All Kids Created Equal? 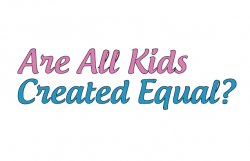 Growing up, every child is automatically placed into a very specific category despite those parents who try to avoid the pitfalls. Even before birth, as soon as the gender of a baby is revealed, everything either becomes blue or pink. There is no in between once the gender is confirmed. A baby boy’s room is filled with cool-toned colors such as blue and green and may have a theme toward cars, sports or outer space. A baby girl’s room has the opposite iconography with warm tones such as pink, red or lavender. The themes vary from princesses, flowers, and cute little forest animals adorned everywhere. The unintentional assumptions that these are things your child is supposed to like because of their gender, happens as soon as they are born and never stops.

Since the feminist movement, little girls have been allowed to break free from these confines. We teach our daughters that “a girl can do anything a boy can do”, and allow them every opportunity to test and try everything so that they can feel empowered and taught they are equal to boys. This is a great movement, and has made progress in the women’s liberation movement, although there is still work to be done in order to level out the playing field. But aside from little girls empowered to be whatever they want to be without judgment or mocking, there still is a disconnect between the way that little boys are raised. Boys are raised with the concept that they are meant to conquer the world. But the reality is that a boy can be anything…as long it’s masculine.

What is masculine? What does that mean in today’s society? Girls can be whatever they want; a doctor, a lawyer, a stay-at-home mom, a construction worker, an athlete, a business woman, and anything they choose to be with little question. But when we ask a little boy what he wants to be when he grows up, if he were to say back, “a ballerina”, he is quickly urged to move into a different direction. Possibly he’ll be urged toward a similar category like an actor or a dancer in general. But he CANNOT be a ballerina! Boys need to be something more masculine. The boys are left with less options, and more social stigmas if they deviate away from the typically traditional male-dominated job field.

When you watch a little girl playing sports with a group of boys, she’s labeled a tomboy and it’s perfectly normal and healthy for her to explore what interests she has. She can wear boy’s clothing, she can have short hair, and she can continue to explore whatever path that she feels suits her. Swap the scenario, and picture the reaction to a little boy wearing a dress or skirt, growing his hair longer and learning to bake using a neighbor’s Easy Bake Oven. Is he looked at the same way as the little girl? Is he just exploring different things to see which suits him best, or have we already labeled him and written him off as being emasculated, effeminate, and destined to grow up to be a homosexual man as an adult?

The term masculinity can mean so many different things and be interpreted in so many different ways, but in the end, there’s still an air of bias towards growing boys that confines them into a box that they can never leave. “Boys don’t cry.” “Boys don’t hit girls, and if a girl hits you, don’t hit her back.” “Playing with dolls is for girls.” “You let a girl beat you at baseball? What are you, a sissy?”. These are just some of the small phrases interspersed throughout a young boy’s life that worsen as he ages. When young males do not show signs of any sexual interest, they’re questioned about their masculinity and ability to attain a female “conquest”. Or his sexuality and motivation are thought that he is most likely homosexual. Men are strong, sexual and do not show vulnerability; not even with each other.

The feminist movement was a great jumping off point for equality. There are many more strides before women are even considered to be treated as equally to men in the workplace and society. They are paid less money, are pressured into looking a certain way, and still have to overcome more obstacles to get half as far as a man does by simply being a man. Children of different genders should be raised the same without the stereotypes and double standards that exist today. In the process of elevating the women’s movement, there have been virtually no steps to allow men to accept femininity as part of their personae while growing as boys. Showing emotion, feminine role-playing games, and clothing not meant for boys are all examples of things that are still frowned upon as boys grow up to become men. Unfortunately we’re raising a nation of men who hold in their feelings, are constrained by the confines of careers that are open to them, and limit their full potential. No matter how parents try to raise their kids to be free who they are and allow them to try everything to become exposed to all of their options, they still end up subconsciously instilling the gender norms into their children.

It may take a few more generations, but as the LGBTQIA community grows and evolves, what was once uncommon may soon become commonplace. When you bring your baby home in a neutral earth-toned blanket into their new bedroom with the cream-colored walls, you’ll begin their open journey as a child that can choose their own path. The room will be filled with dolls and trucks. The closet will be filled with pants, suits, dresses and skirts. The child will choose their own name as time goes on and they can decide what they feel is the most natural for themselves. Even if they choose to identify as a gender, they should never be locked into that gender role. You can wear a dress today and be a princess, and then afterwards you can put on an football jersey and play a game of football. The end goal for the future should be to raise our children to be good human beings. Teaching them to understand and share their feelings while helping them become independent entities that can exist without a partner if they choose. 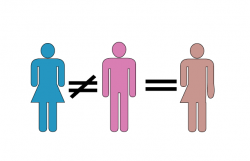