A Vegetarian at the Gym-Ultimate Grill

I have to say t 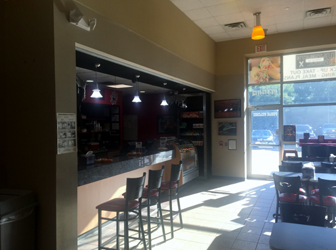 hat I’ve never eaten in a gym before. I wasn’t planning on it today. I was going to work out at the gym before continuing on to school (That’s the massage school I’ve been attending for the past year). I hadn’t eaten lunch, and I didn’t want to eat lunch at home right before I worked out, so I thought I would stop somewhere on my way to school, probably for a protein bar. I worked out as usual, even though I was a bit hungry, showered in the locker room, got dressed, and headed for my car. I knew that just past the main entrance was some sort of food place, but I had never been down to that end of the main hallway. Just before I turned to exit the building I decided to head down and check out what they had to offer, if they were even open. I approached a food counter, not seeing anyone around, and found a menu in a holder on the counter. My expectations in eating at the gym were not high, I have to admit. I figured I’d be called “Bro” a few times, and express dismay at my limited options as a vegetarian. As I started to read the menu, I heard  a voice from an opening between the counter and the kitchen behind. It was a young man working in the back who assured me that he would be right with me. I’m not sure what I was expecting. I think it was a few protein shakes, and maybe burger or two. I mean, it’s in a gym. I did see a picture on the wall of the small counter area of a salad with shrimp on it. I can’t say it got my hopes up, but I was getting a little better feeling about my decision.

A different young man, Timmy, came out to the counter from the kitchen and asked me what I wanted. I think he put it more like, “What can I do you for?” or something like that. I explained that I didn’t eat animals, and noticed one or two vegetarian items on the menu. He said that he highly recommended the Vegetarian Wrap. I looked at the description and told him that I would try it. An older man, Demitri, came out from the kitchen and asked me what sides I wanted. Even though they had brown rice and beans listed, he said that they didn’t offer that any more. So I chose the brown rice. Turns out he’s the manager of this food establishment which operates inside the gym.

While I waited for them to prepare my meal another young man appeared at the kitchen window. Turns out this was Mike, the chef. Demitri asked him to explain to me what was in the wrap. Mike appeared delighted to tell me that he put hummus on the wrap, then he sautéed peppers, onions and several other things that I don’t remember because this whole exchange was getting more and more interesting, and took my mind off the ingredients. He described with enthusiasm the way he cooked the food and then at the end put in raw spinach to delicately get warmed and wilted by the hot vegetables. Then he asked if I wanted cheddar cheese with my wrap. I said, “Of course!”

I had quite an interesting exchange with Demitri about him growing up in Greece, and how Mike was always singing, and since I was a musician, did I need backup singers. You get the idea. It was quite unexpectedly pleasant, considering what I was expecting by having lunch at a gym.

Ultimate Grill is inside The Robert Wood Johnson Fitness and Wellness Center, 1044 US Highway 9, Parlin, NJ 08859