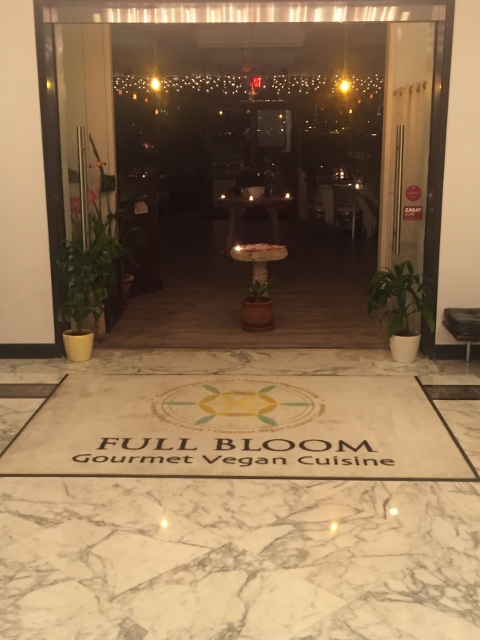 Lunch today was exciting, but dinner tonight was an adventure. We would soon see whether that was because of the food, or other factors. It's our last night in Miami, the conference is over. All our old and new friends are gone. My husband Joe and I googled vegetarian restaurants in Miami and found a gourmet vegan restaurant. I was thrilled that he wanted to go. It was a bit farther than lunch was, and would be a $17 Uber ride one way. We had gotten a $15 off our first Uber ride coupon from the conference, so we were back on Uber to a small island off the shores of Miami Beach. The car stopped at a long, walled driveway leading up to a rather ritzy looking apartment building in a rather posh looking neighborhood.  No signs.  No restaurant. We got out of the car and walked up the steep ramp and around the building until we found a door. The attendant told us that there was indeed a restaurant in the building and asked us to sign in. We were directed to the rather weathered, wood paneled elevator, made our way to the mezzanine floor, and wound around to the back of the building.

The restaurant was an odd combination of bare light bulbs, white plaster, huge glass windows overlooking Biscayne Bay, the Port of Miami, and the high rises of Miami Beach, in a 70's kind of condo building with a yellow Formica'd bathroom. It felt very 70's. We sat out on the terrace since it was a cool (for Miami) breezy evening.  It was also odd that we were the only diners not smoking. All of the diners had chosen to eat outside. I thought that perhaps those who chose to eat vegan would also choose not to smoke, but apparently I was wrong.

The menu was four sheets of paper on a clipboard. I was fraught with anticipation with the idea that I could order anything on the menu and not have to worry if it had meat in it. This would not be like the previous Thursday evening at the Cuban restaurant where my entire table had a ten minute discussion (mostly in Spanish) with the waiter and owner about what I could eat on their menu that didn't have meat in it. Their best offering was the chicken soup.  The waiter offered to pick the chicken out of it himself. The font of the Full Bloom menu was small and curly, so we had to read it by the light of our iPhones. Seeking the flavorful and exotic, I chose to drink a Pirates on the Ship, which was a tasty blend of gin, grapefruit, and jalapeño. It was rather good: not too tart, not sweet at all, and just spicy enough.  Well, that was true until I foraged around the ice with the straw at the end of my drinking experience, managed to latch onto a piece of jalapeño, started biting it not knowing what it was. That was hot.

Joe and I shared an appetizer of Black Bean, Avocado, and Sweet Potato Sliders. They were delicately spiced. I guess I need, at times, to ramp down my expectations so that I can enjoy life's subtleties. The little burgers were good. And my tongue and lips were still tingling from the jalapeño.  I wasn't sure what to expect from a Slider. The bus boy had previously brought us shot glasses of gazpacho. I began to wonder if those were the sliders, based on my experience with raw oysters in a shot glass, but it turned out to be more like the White Castle variety with a much more healthy bent.

My entree was Cashew Ricotta and Spinach Ravioli in Butter Sage Sauce. I was glad we had the Sliders. The plate was just about six or seven small ravioli.  Nothing else.  But it was nutrient dense food.  I was not hungry after the meal.  The ravioli were great.  Again, very subtly spiced. There were whole sage leaves in the sauce. I really enjoyed those.

We opted not to have dessert. We looked at the menu and Joe said, "Vegan dessert? What's the point?" The waiter brought him a small regular coffee with steamed milk, I think as a consolation. Joe said that it was thick enough to chew. If I had had it, which I would love to have had, I would have been awake with a pounding, flopping heart for three days.

It was an adventure. More because of the trip to the posh islets of Miami Beach and the oddity of eating in a condo building than for the food.