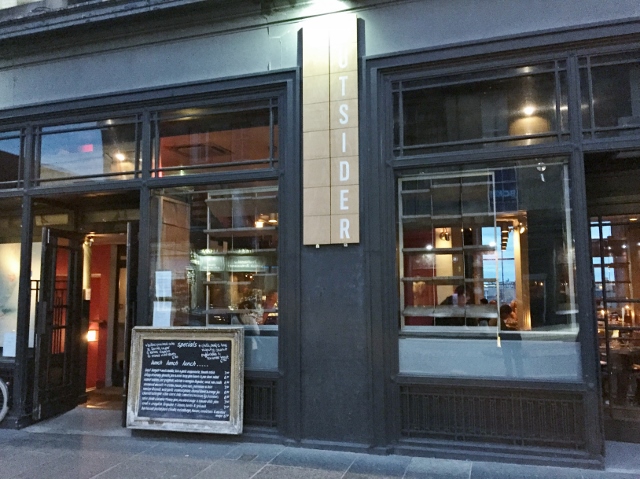 Sometimes it just happens. Every once in a great while there is a rare combination of chance, good luck, surprise, and delight. Tonight was one of those nights. We got to Edinburgh at dinner hour with the evening free. The same four of us from the Dublin adventure set out from the oddly fun Ibis Hotel in the heart of the old city, rounded a corner, and headed down a street lined with stunning old ornate buildings. Not a block from the hotel we found The Outsider. The three-story restaurant is a combination of old and new, wood and glass, formal and very informal. A handsome young man showed us to a table right in the center of the airy restaurant, with a view out huge windows onto the rooftops of Edinburgh, somewhat reminiscent of a scene from Mary Poppins.

Not long after we sat down our waiter, Reuben, gallivanted to our table asking for drink orders. Reuben is a cute young Scot in black jeans and a shaggy shirt, sporting a slight scruff of beard. He brought us a Montepulciano just in time for us to order food. The four of us shared skewers of sesame-crusted aubergine (eggplant), courgette fritters (zucchini), peppers, haloumi (high melting point cheese), za'atar(spice), and an orange yogurt sauce. It didn't last long. It was very tasty.

We had just finished the appetizer when I noticed Reuben sitting up against a woman customer on a bench seat, helping her and her dining companion with the menu. Too bad I was sitting in a chair, I thought. After I had had just a few more sips of wine, Reuben and two other wait staff brought our diners.

I had reluctantly ordered gnocchi. At our last dinner in Dublin at the hotel the only vegetarian entree was gnocchi. Unfortunately, not only was the gnocchi just passable, it was in a cream sauce. The color was bright white, and the texture was of semi-dried Elmer's Glue.  It made swallowing difficult. So when I looked down at my plate at the Outsider, I was not only pleased, but also surprised and intrigued. The gnocchi were pan fried with pesto, spinach, and rosemary.  But most interesting was the shape. They were long and thick rectangular sticks, fried to a dark brown.  At first I thought they were French fries. The extra thick kind. Now that would have been different. When I cut into one and tasted it, they were indeed gnocchi, just formed into the long shapes and fried perfectly. The texture was splendid. The sauce was very tasty with a shaving of Romano cheese on top and several sprigs of watercress. It was one of those unexpected exciting dining moments that don't come often enough.

After dinner it was time for dessert. We were in Scotland, so I decided to have a Scotch. I beckoned Reuben over to my side and coyly told him, "I'm all for new experiences." He squatted down, nuzzled his knee into my leg, leaned onto the table with his arm pressing against mine, and scanned the menu. I showed him three or four single malts on the menu that I liked, but asked him if there was something there I hadn't had that he would recommend. He selected the Springbank 15, and winked at me as he assured me that I'd like it. I did. It was a satisfying end to an exciting meal.

The Outsider Restaurant is at 15 George IV Bridge, Edinburgh, Scotland.