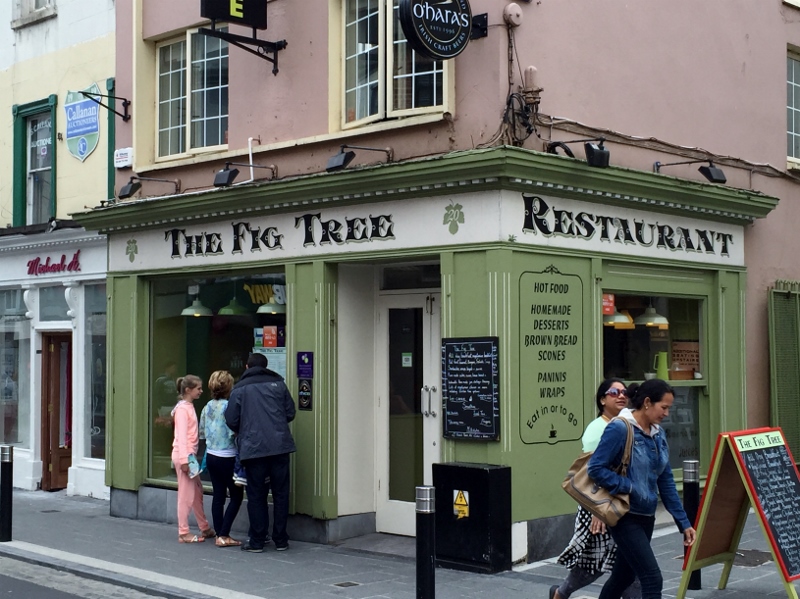 I'm traveling with a group through Ireland. I worried before we left that there would be little choice for a vegetarian. I imagined eating potatoes for twelve days. I could always drown my sorrows in Guinness, right? Well, I've been here for five days. I have had some rather interesting potato dishes and a bit of Guinness. Most hotel dinners so far have had one vegetarian option, never on the menu, and always pasta. Even at lunch the options in local pubs have been pasta, potatoes, sometimes in the same meal, soup, often potato based, and salad. At one pub I was able to get a toasted cheese sandwich. They do have really good whole-grain bread here.

Today we are in Kilkenny, Ireland. We have the afternoon free, so Joe and I started walking around the downtown area of this pretty, medieval city looking for a place for lunch. Something drew me down High Street, just across a beautiful river bridge near our hotel. After passing several cafes, pubs, and Kilkenny’s only yoga studio, I happened to notice a little green restaurant with a menu out front. The word "vegetarian" popped out at me. I think I had found Kilkenny's only vegetarian-friendly restaurant.

I ordered green tea and the Potato-lentil cakes. It came with a delicious salad with chopped up peppers and a tasty dressing. The cakes were thick and hot.  They had a tender texture because of the potatoes, but held together until I could dip each bite into a vinegary caponata sauce. They also had a nice caraway flavor to them. I was in veggie heaven. It was just nice to eat something not pasta or zucchini based. If you don't know me by now, I hate zucchini.

We were sitting next to a couple with a toddler. The mother turned to us and said in a non-Irish accent,"That's not a local accent. Where are you guys from?" She was from British Columbia, Canada. Her husband was local. We had a delightful chat along with our delightful lunch.