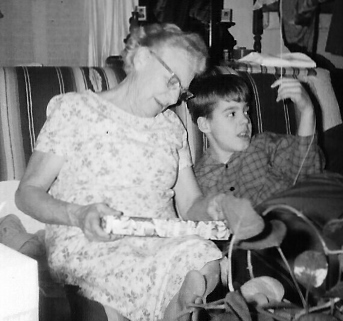 Is it death we fear? Is it the unknown? I won't profess to know what happens when we die. I can’t say for sure whether our consciousness lives on, or whether the body lives on as well. I don’t know if death is the end. I do know that there's a connection between living beings. Whether our minds make the connection, or whether our consciousness is connected to others in ways we can't see or understand, I delight in pondering the things that connect me to others.Call it coincidence. Call in synchronicity. Call it ESP. Call it intuition. Call it whatever force you want to call it. I believe we fear the loss of connection more than we fear death.

I believe that for everyone there is one person, usually a relative, that we are connected to more deeply than all others. Perhaps this just happens at birth.  Maybe they are assigned to us. Maybe we pick them in some subconscious way. Mine is my grandmother, Ruth. As far back as I can remember my connection to her has been deep. She lived in Florida, and I usually saw her only once a year. But that didn't matter. She always called me Steven instead of Steve. Maybe she knew I would prefer it when I grew up. Maybe she's the reason I do prefer it. She's the one who made a big deal of my 7/11 birthday that I carry with me to this day. Between us there was always an understanding that we never had to speak about.

She died in 1986. But the loss had happened earlier. She never seemed to recover from the loss of my grandfather. After he died she just wasn't able to communicate in the same way. But I still felt the connection. After she died I would see the number 711 and feel her presence all the more. It was after her death that I started asking people to call me Steven. Not only do I prefer it,  but every time I hear someone call my name I think of her. I will always feel her presence. It is because of it that I can fear less. It is because of her connection that I know I will maintain one with others no matter what.