Yoga on a Helipad-Part Two 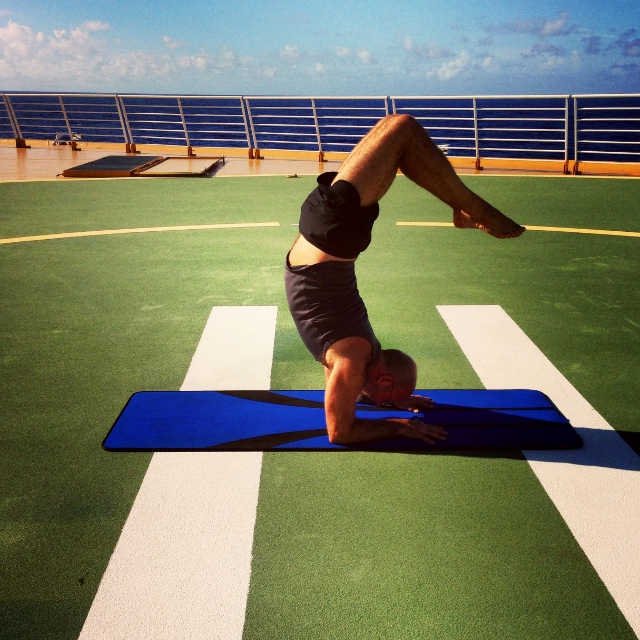 On the second day of the cruise, my suite mate Brian and I went to the Friends of Dorothy meeting in the Champagne Bar. This is a way that gay men used to advertise meetings on cruises in the days when we didn't want the straight people to know we were gay and wanted to meet each other, as if they wouldn't have figured it out had they happened upon the location. Or in the case of a recent incident, I heard about a woman who came to the meeting as advertised on her ship because she thought it was a Wizard of Oz trivia game. She was, shall we say, vocally not happy with all of the gay men there. Anyway, at this first meeting, we met a couple from Utah. One of them is a massage therapist. They were traveling with friends. One of these friends was also a massage therapist. I was telling them about the yoga class on the helipad and that it would be the next morning as well. They both agreed to go since they had each done yoga before.

This morning at 7:45 they met me in the gym. The class of about 20 went out onto the helipad with Matja, the teacher from Monday. The class was almost exactly the same as Monday's. That was okay. It was especially enjoyable to practice next to new friends.

After class, while people were leaving the helipad, I asked the teacher if I could have a picture taken on the big H in the center of the pad. He said it would be fine. So the male therapist took my phone and I did a few forearm stands. Yes, it was a bit egotistical of me, yet again, but as I said before, perhaps it will be inspiration to someone. And it will look nice here in this post.