Yoga On a Helipad 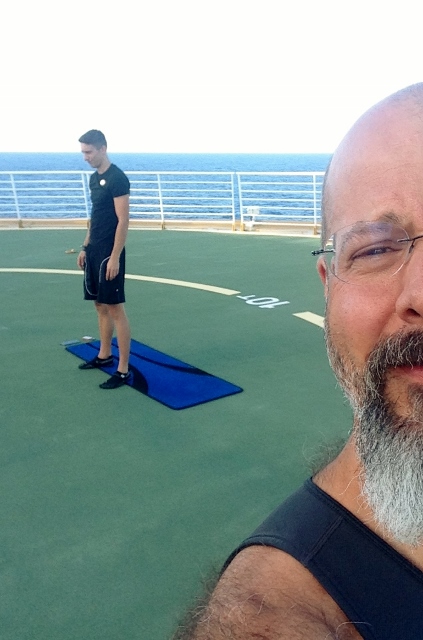 Back at sea, somewhere off the coast of Cuba. I got up early for the second yoga class. This one was taught by a young Scottish man named James. He was delighted to inform us that we had the captain's permission to go out onto the helipad. The helipad sits at the very point of the front of the ship on deck 7. It's a restricted area.  We grabbed a mat and followed James through the secret door and into the sun. No towels.  They could blow into the ocean.

I was again pleasantly surprised at how well the class was taught. It was not what I expected from a gym trainer. The emphasis was again on breathing and focus, not physical movement or fitness. There were about 35 men and women of a variety of ages. The class was not at all easy, though, and not just because of the listing of the ship from side to side.  Several of the stretches were intense and difficult to balance.  Many of the poses were held for a long time. It was good.

I practiced next to a young woman who remarked that she felt the class was not "vacation yoga" as James had described the class beforehand. I said to her that I thought it was hard. She said she was happy to hear someone else say that. She was tickled to point out to me her husband, several decks above us on a large balcony sun deck, vigorously waving to her. She explained that it was their fifth anniversary cruise, and that he was watching her and waiting for her for breakfast. "Newlyweds," I said.  I wanted to ask why he wasn't taking the class, but I held back.

So I learned not to be so judgmental of yoga on a ship offered by fitness instructors. I would have spoken to James about his yoga training, but that would have been even more egotistical of me. Besides, I was in a hurry to meet my own husband for breakfast. I'm not sure even at five rather than eighteen years he would have been playing a balcony scene for me. But there's always tomorrow.