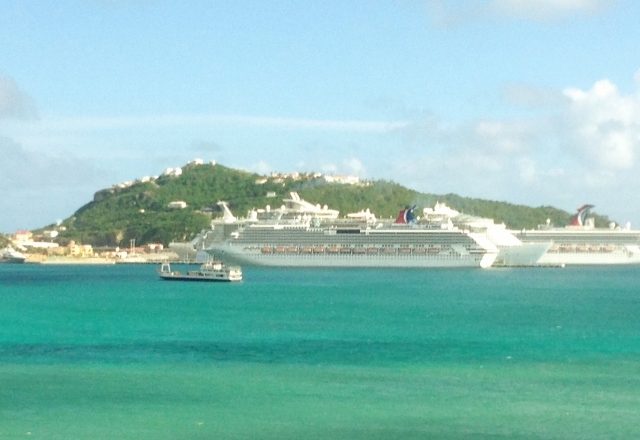 It was a day at sea, somewhere between Nassau, Bahamas, and St. Thomas USVI. I got up at 7:00 and headed down to the gym at 7:45 as I was instructed to do when I signed up for yoga. I signed up with Matja, one of the fitness instructors, when I first boarded. He told me that either he or another fitness instructor would be teaching the class at 8. We would go together out to the helipad. I have to say that my expectations for the class weren't high. I figured it would be a very fitness oriented class with  just a few elements of yoga, but the idea of going out to the helipad sounded exciting. I kept telling myself to keep an open mind, to just do the class, and be receptive to whatever it was that the experience would bring me. When I got to the gym there was a large group of people sitting on mats in the middle where we were to meet. I didn't know if they were waiting for the class or not. If they were, then there wouldn't be much room for me and I started to get annoyed. It turned out that they were in the middle of a stretch class. Soon Matja came in, the class ended, and he said he would be leading the yoga class soon. It was indoors where the stretch class had been since it was too windy to go outside. I got a mat and sat in front. He said it would be a beginner to intermediate class, and asked who had yoga experience. I raised my hand, but didn't want to let on that I had any teacher training, since I wanted to experience the class as anyone else would. The class was what I would call very traditional, with many elements of yoga, deep breathing, slow stretching, yoga poses, and the like. It wasn't easy. There were quite a few challenging poses and I was pleasantly surprised.

The ship is traveling fast to our next port with no stabilizers on. All night and all day the ship has been rocking aggressively. At one point, the ship swayed suddenly and the whole class fell out of triangle. It was pretty funny. It reminded me of a scene from the original Star Trek series where the ship gets hit and everyone in the hallway falls in the same direction. The whole class was kind of like surfing, although I've never done that other than on a subway. I think I'll go to the next class on Thursday. I hope we get to go outside!