Yoga on a Boat Part 1 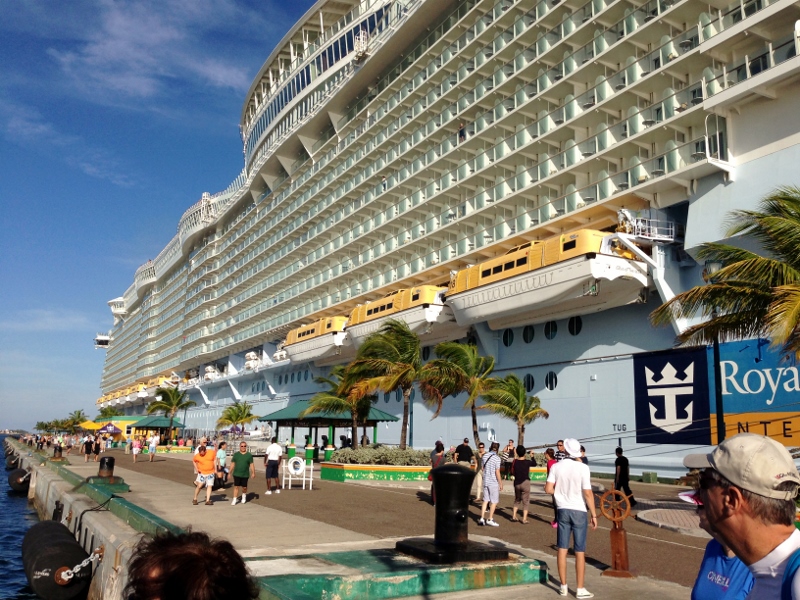 I'm on a really, really big ship named The Oasis of the Seas with over 6,000 passengers. We are somewhere between Nassau and St. Thomas. I decided to waste away the afternoon at sea in the gym instead of napping like my three other cabin mates were doing. The gym is huge by gym standards;  unbelievably big by cruise ship standards. I did my usual chest workout and noticed that there were mats in a big common area. I put one down and started stretching. I wanted to do yoga but I also didn't want to look strange. Ok, maybe that should be in my "Overcome by Fear" blog.There was this ballet-type guy pirouetting around the machines, hanging off one upside down and arabesquing off another one there. The attention would be clearly not on me. While I was doing some stretches that would be gym worthy anywhere, a young guy set out a mat next to me, propped up a laptop, put on a yoga DVD and started doing a vinyasa class, complete with music and more than an occasional "You look great, dude," from the tiny speakers. So off I went on my own class. Headstand wasn't easy on a moving ship, but it felt good to work up a yoga sweat. Yeah, it's different than a cardio sweat. I think the sweat evaporates just a little bit slower than you produce it. I left before the guy got to sivasana. Not that I was expecting this DVD to encourage sivasana. Maybe a, "High five, bro," at the end.  Tomorrow morning I'm signed up for a yoga class at 8 on the helipad. Wish me luck.