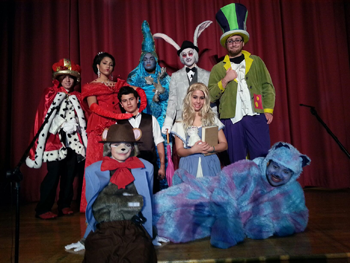 If you live under a rock and know nothing about this show, it's unreal, literaly unreal.  Wonderland is a magical place filled with magical creatures. Not just some period drama or comedy but a totally new and unique universe that Alice explores after she falls down a rabbit hole (big rabbit)!

Once we knew what show they were producing and that our daughter, Madison, had the title role we knew we could not turn back.  Michael and I have been sharing our own version of a magical universe for close to 32 years and I knew that making Wonderland come to life (on a shoestring budget no less) would be no easy challenge but that we could live up to it.

I sat in the audience Friday night and actually, for the first time, saw the show.  There she was Alice, our Alice, acting and singing away.  She, not the costumes, transformed me as she took me out of my seat and placed me in Wonderland.  Of course, I never actually moved but it was her pure talent and drive that made the show.  The art department was amazing with props and backdrops, the costumes were FABULOUS (if I do say so myself) but it was Madison who reached out to the audience bearing her soul and took everyone away from their problems if only for a biit and brought them to Wonderland.

As a 17 year old girl, she can be quite challenging at times.  She works/studies hard in school, she's a varsity track star, getting ready for her driving test, studying and practicing for the SAT's all while holding down a job as a dental assitant.  So I get it, I really do get it that it's tough for her right now.  However, with all that going on she took on the lead of the show and transformed herself into Alice, and by doing that took us all along for the ride.

There is no doubt that Madison has a bright future ahead of her.  She is determined and has integrity.  She actucally seems to be a rare breed these days so her journey may not be easy but as she reminded me tonight is that life is in the jorney and that Wonderland may not be all it's cracked up to be but in the end, the very end there is always love!

JON HOLDEN GALLUCCIO, AUTHOR OF “AN AMERICAN FAMILY” WITH MICHAEL GALLUCCIO AND DAVID GROFF. HE HAS THREE CHILDREN AND THREE GRANDCHILDREN.  HE RESIDES WITH MICHAEL ( HIS HUSBAND OF 31 YEARS) AND TWO OF THEIR CHILDREN IN NORTH HALEDON.  THEY ARE BOTH ELECTED OFFICIALS IN NORTH HALEDON.  JON CAN BE CONTACTED AT 973-573-4344, ON FACEBOOK: JON HOLDEN GALLUCCIO  @njgayfamily ON TWITTER.

mellisa lopez on February 20, 2015 at 5:17:21 pm said:
DR,EWAN SAVED MY MARRIAGE
Having my husband back has brought great joy in life, This is one thing that i have always wished for in my life and getting it so easy through the help of Dr.Ewan was the greatest surprise that i received. I must confess that Dr.Ewan has the great powers to rescue people from heart break and this can be done by contacting Dr.Ewan through this contact information below