You can call me a wuss. I’m fully aware of it. I don’t like blood. I don’t like to see it, think about it, talk about it. I remember the first time I had to have blood taken in my adult life. I was 37. I worried about it for days. It was the worst thing someone could do to me. Stick metal in my arm and take blood out. I told the nurse that I had to lie down, and that I was terrified. It was as if she were going to kill me. I had to look the other way, close my eyes. Then I started to feel faint. And she hadn’t even done anything yet. I sweated so much the paper on the exam table was wet.

It was very similar to the time that I banged my finger putting a 45-pound weight on a barbell. My fingernail turned blackish red and hurt like hell. I went to the doctor because I couldn’t stand the idea of the nail falling off and exposing all of that, whatever it is beneath your nail. She calmly explained that we might be able to save the nail if it were drained. Drained? The bottom of my stomach dropped out and I got queasy. She explained that she would drill (DRILL?) a hole in my nail to let the blood out. That’s it. No way. She grabbed my hand, looked me in the eye and said, “Don’t be a wuss.” Out came what looked like a pen and without even a bit of sensation there was a hole in my nail. I closed my eyes. There’s got to be a better way. I don’t WANT to be like this!

It was like that every time I had to do anything associated with blood until about ten years later. I was having acid reflux that wasn’t responding to drugs or diet. I went to an acupuncturist. How I got in the door I’ll never know. But by then I had become a pretty serious yoga student. I think in my mind the two things were similar. It was somehow comforting. The treatments were a breeze. Not only did it not hurt, I didn’t even feel them. Them. The needles. And soon after the treatment started I fell asleep. Yes. Asleep. With forty needles in me.  I went quite a few times.The reflux disappeared.

Soon after that, when I had to have blood taken, I tried to strengthen the bond in my mind between acupuncture and yoga. I started to breathe deeply and slowly as one does in yoga. I started well before I even got to the doctor’s office. This first time I asked to lie down and the nurse kind of giggled. She said, “Really? It will be over before we can even find a place for you to lie down.” I kept breathing. I sat. I still closed my eyes. The strange thing was that without clenching and worrying the needle doesn’t hurt. Not at all. And instead of thinking about the gallons of blood that were being let out of my arm, I focused in my mind the way I do when I breathe in yoga. It was over. No pain. No sweat. No nausea.

Soon I was keeping my eyes open. Talking to the person assaulting me with the metal. I hate to say it, but it was almost like I was challenging myself. Then it became routine. MRI’s with contrast? Piece of cake. Surgery? Bring it on. One time I even remarked to the tech (of course it didn’t hurt that he was a cute bearcub, but I digress) that I had heard that I had good veins. He told me, “Buddy, you have PIPES!” The thought of my blood spilling out through pipes didn’t bother me in the least! I had overcome!

Do I still need the breathing? I don’t want to find out. 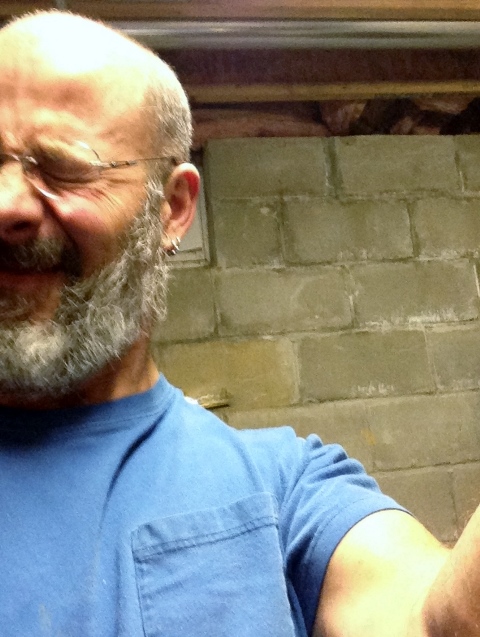 Peter Frycki on February 19, 2014 at 8:37:15 am said:
I completely understand. Drawing blood - even watching a tech do it to someone else always has made me cringe.