Thinking of Opting Out? Take a Note from Same-Sex Parents 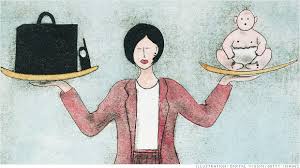 Summer of 2013, The New York Times released a piece by Judith Warner in its Sunday Magazine, entitled “The Opt-Out Generation Wants Back In,” returning to the women interviewed in Lisa Belkin’s 2003 Times article “The Opt-Out Revolution.”  The women, all of whom had bid farewell to high-power, high-paying jobs to be full-time mothers, had either returned to work or wanted to. Sixty percent had re-entered the work force, and some others were trying unsuccessfully. Not surprisingly, given that Warner’s sample is upper middle class, some had been able to go back rather easily. But others struggled and often settled for a job they did not want or that did not pay well so they could support themselves post-divorce or if their husband had lost his job. Some of the post-article comments focused on the problem of being overworked: none of the women wanted to return to the 50-70 hour work week they left, but there are still few employers who take part-time workers seriously.

As a feminist, this speaks to me. Second wave feminism was never about simply making it in a "man's world". We wanted the entire system to work differently, in a way that was more accommodating of families, a way that was more fair and balanced. Things like better employment opportunities for women, job-sharing, and day care became key focal points because women would need power and money to truly make any changes.

Somehow that all became women "opting out".

As a white-collar, educated professional, I have a privilege and freedom most working women don’t. I also have a different way of looking at things, informed by the fact that I am a queer parent who, together with a female partner, chose to mother and raise a child together. He recently turned 30. My personal and professional lives have always been deeply embedded in the LGBT community, where I’ve raised and shared in the raising of four kids and returned to work very quickly after each of their births or adoptions.

When I was pregnant with my first kid 30 years ago, an older and wiser working mom told me something that has stuck with me ever since: “Never make friends with a stay-at-home mom”.  Now that may sound harsh, but what she meant was that a lot of stay-at-home moms are quick to judge the working ones (especially working moms who could afford to be stay-at-home moms), whether it be in subtle or obvious ways. The upper middle class heterosexually married "opting out" moms portrayed by Lisa Belkin and now Warner are not the financially struggling women who stay home because childcare is too expensive and/or of low quality, but the ones who have a personal choice.  These "opting out" moms often feel they've taken the virtuous route, the one that's best for their children. And their husbands, actually the whole culture when you think about it, agree with them.

A lot of folks hold the belief that women are "naturally" more suited to parent and that children need and deserve a full-time mother at home with them. Most men and women accept this myth despite decades of research demonstrating that it makes no difference to kids’ well-being whether they are brought up in quality daycare or with a full time parent. Staying home can be some really hard work; not so much for upper middle class women with hired help.

Women who consciously and willingly return to the workforce and rely on child-care assistance are viewed as selfish or at least as less adequate mothers. This post-modern version of the belief in the sanctity of motherhood has morphed into a "women’s choice and freedom" issue.  The practice of "opting out" seems to blend traditional values with more modern notions of egalitarianism. The Opt-Out women feel entitled to choose work or home life while their husbands continue to work, and at the same time they maintain the feminist expectation that Dad share housework and childcare.

Unfortunately, the decision to stay home hasn't panned out as well as people had initially hoped and thought it would. Over time, some women experienced a loss of personal self-confidence and self-esteem, and some began to feel like they genuinely were inferior to their husbands.  For some, problems developed when husbands resented having to share household chores they expected be done by their wives during the day, or resented that they never had the choices that their wives had to incorporate better work-life balance into their lives. It seemed that Opting-Out had as many problems as Leaning In.

So now, same sex parents: how can we queers help the heterosexual family? We can learn a lot from the research on how same sex couples function relative to straight marriages, most aptly summarized in Liza Mundy’s June 2013 Atlantic piece titled The Gay Guide to Wedded Bliss.  Gay and lesbian couples with children do it differently than straight ones. First, lesbian households are the most egalitarian, with it being far less likely that one would opt out and the other would continue to work. What usually happens is a compromise, both adjusting their schedules to equally assist in child rearing. Lesbian moms share chores and child care with a greater frequency than all other relationship models, often deciding to "blend" their incomes for the sake of fairness. Observational studies comparing lesbian moms to heterosexual parent pairs show that when interacting with kids together, two women tend to reinforce and support each other's parenting while straight couples often obstruct each other.  Lesbian parents seem to have more inherent respect for each other’s abilities and family decisions. Gay dads lean towards an egalitarian model too, but they tend to "specialize".  Unlike straight couples, gay men fight about who "gets to" work instead of who gets to opt out.

From same sex couples we learn, first, that no individual parent is "entitled" to make unilateral family decisions, like whether or not a parent will stay home to raise their child. Next, the relationship between money and power: how common it is for the bread winner to feel superior and/or the at home parent to feel inferior. For many women, staying at home becomes a dull and thankless duty, especially when housework is a big part of it. There’s a reason gay Dads who "specialize" fight to be the one to go to work – they recognize the inherent boredom in much of the routine of childcare as well as the power that money brings. "Specialized" households are in no way inherently problematic, as long as both parties are satisfied and equal.  And as long as it is done with understanding that though this may the best choice for your particular household, it is not the best choice for all children, and this arrangement is no more inherently structured to raise healthy children than any other quality arrangement.

One con to the one-parent-at-home model that is rarely brought up: what you could potentially be depriving your child of because of lacking money. Because I’ve worked as hard as I have, my children have been afforded top notch educational resources, special services for their learning disabilities, life-broadening experiences – and they will walk out of college not owing a dime.  I wasn't home with them every minute, but I've been able to provide a lot for them.

So straight couples, some pointers if you're interested.  Women need to consider relinquishing  the sole privilege of choice.  At the same time, men have to give up the sometimes unconscious tendency to dominate their spouses through financial power, using their stay-at-home wife as a "status symbol" or expecting they will be "taken care of" by women.

When both partners are of the same sex, the problem of inherent gender differences just isn't there. So when it comes to parsing out responsibilities it can be a rational decision, based on who's good at what or who likes certain things instead of dated gender stereotypes. A belief in equal worth in gay relationships gets rid of a major source of relationship strife.  Gay couples interact with each other better, as a unit, than heterosexual couples when co-parenting, because the teamwork is there in the relationship in general.  Seems like that's what's better for children, to see happy, cooperative parents and not discord?  And getting a uniform message from both their parents?

Another thing same sex parents are doing right? They usually remain friends with ex-partners. I have seen bad divorces in gay families and the LGBT community, like any community, certainly has unstable and immature people who would rather get revenge on an old partner than do what's best for their child.  But queer life has long normalized and embraced friendships among exes. It is the norm rather than the exception, so new partners rarely bat an eye.  When children are involved, this means that children do not experience being torn between fighting parents.  The transition to blended families and step-parents is made simpler, resulting in a rich, extended support system for the child.

Straight folks have to give up the fiction that stay-at-home moms are better for children.  That assumption may seem to privilege women with choice, but once assumed, it chains women to domesticity. Feminists dating back to 50 years ago were aware of the problems with the pedestal of motherhood, and some heterosexual women are learning it again in the 21st century.  Heterosexuals have to stop pretending they are engaging in work/homelife specialization because it is for the good of the children.  It’s a choice – like all parenting decisions – based partly on self-interest.

There is nothing radical about opting out of the work world to be a full time mother. What will be more radical is if heterosexual men and women are inspired by the egalitarian nature of same sex relationships to fully share decisions about who does what with housework, childcare and working. Only if both men and women, gay and straight, are involved in a cultural push for a more ethical work world, do we have a chance of radically changing a culture that makes work/life balance next to impossible.  Now THAT will be a movement.