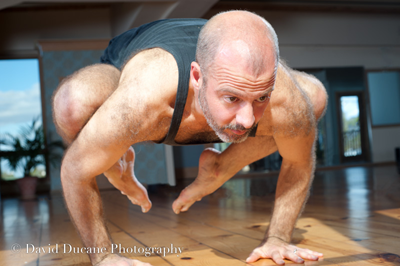 We all do it. We make excuses. I try to rationalize doing it by convincing myself that it is part of being human. The more I study and practice yoga, the more I realize I need to stop. I need to just tell the truth. State the facts. “I didn’t do it,” rather than “I didn’t get to it because..” That’s it. Maybe I watch too much Judge Judy. “Don’t tell me that. I don’t care about that.” Last night she was great. She said, “I love the truth. Just tell me the truth!”

I try to advertise my yoga classes in any way I can. Facebook, Scruff, Growlr. Yeah. I’m there. But, frankly, at my age and relationship status, it really is much more interesting to talk to guys about yoga. My profile picture is of me in one of my favorite yoga poses, Crow. Me balancing on my hands, knees bent up by my shoulders. It gets attention. And a LOT of guys want to talk about yoga. They ask me all sorts of interesting questions. Many, many guys out there practice yoga. It’s great to meet them and talk about yoga. A LOT of guys want to take yoga. Many seem genuinely interested in starting a practice. If they are nearby, I invite them to whatever class might be near them. I must have had a hundred guys tell me that they are definitely coming to my next class. Out of that hundred do you know how many have actually come to a class? Two. Yeah. Two out of a hundred. I don’t doubt that the other 98 were genuine in their interest. But some of them have told me several times that they were definitely coming! But I’ve never seen them. If I see them again (and sometimes they disappear) online, I get excuses. “I fell asleep.” “I got home and sat on the couch and just couldn’t get back up again.” “Was it last night?” “I’m just so busy and things are just so hectic.” All the more reason to get to a yoga class.

Something deep inside me says that we shouldn’t make the promise in the first place, but then, if we didn’t, would we ever do anything? If we didn’t promise to do something, would we do it? I say, “Yes.” The next time someone asks me to do something and I’m not sure I want to or will be able to, I’ll say, “I’d really like to do that,” instead of, “I’m there!” Or better yet, if I tell someone that I’m going to do something, I will be certain to do it. Yeah, that’ll work. We will see.

My least favorite thing to hear when I tell someone about something I think they should do, like going to a yoga class, is, “I’ll try.” That tells me that they aren’t going to do it, they just want to tell me something to keep me asking them to do things. I never expect to see someone show up that tells me, “I’ll try.” Then again, with the above mentioned odds, I’ve come not to expect anyone to show up at anything.

I have to get past all of this. What to say to someone who promises to do something? How to respond to “I’ll try” without offending anyone? How to get people to actually come to a yoga class?  Yoga teaches me to disregard the wicked. But are they really wicked? Yoga teaches me to be compassionate toward the unhappy. That’s it. We make excuses because we are unhappy. We want people to like us, so we tell them an excuse for our behavior so that they will continue to like us, but then we can go with whatever better comes along instead of the original activity requested. But it still leaves us unhappy that we didn’t fulfill a promise made. Or perhaps we are unhappy at being caught.

The bottom line is, don’t make promises. Honor people’s requests if you can. Decline them if you can’t. Tell the truth. Be friendly toward the happy. Have compassion for the unhappy. Delight in the virtuous. Disregard the wicked. Go to yoga class. Breathe.