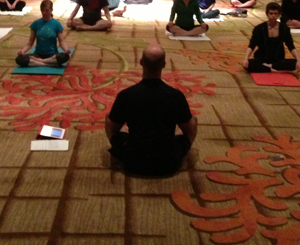 Daily? You mean I have to do this every day?

When I first started practicing yoga, it was a good week if I went to the class at the gym once. That class was about 50 minutes. I also lifted weights, so it wasn’t like that hour or so class was all of the fitness activities I did. When I first started attending classes at yoga studios, someone told me that when you move from once a week to twice a week, the benefits of yoga increase exponentially. But my objective at the time was to be regular about going once a week. And that I did. It helped that I liked the studio, or liked the teacher, or found him attractive, or had a new yoga outfit I wanted to show off. The important thing was that it became a habit. A habit that I liked, and was convinced that I was getting great benefits. When I started going twice a week, the realities of attending teacher training began to formulate. I would call that an exponential increase.

Even before I went through the certification process and became a yoga teacher, I attended a workshop at the Kripalu Center for Yoga and Health in the Berkshires of Western Massachussets. I met so many other people that seemed to be a lot like me. I talked with them about how yoga fit into their lives. One of them told me that yoga began to become a profound part of his life when he started a daily practice at home. Soon after that I went to an ashram in the Catskills for a week, the Sivananda Ashram Yoga Ranch  There, yoga was part of my life all day, every day. Since I was the only guest that week (it was the dead of February and in the middle of the week) they treated me like the ashram residents. We sat and meditated at 6 in the morning. We sang a lot. We did yoga for about four hours a day. We ate vegan meals and practiced service by cleaning and cooking. After I got home I started doing the yoga moves, the breathing exercises, and the meditation at home as many days as I could.

In the past two or three years my home practice has settled into 20 – 40 minutes, four or five times a week. Sometimes because of work and home schedules, I do fifteen minutes here, 10 minutes there. The important thing for me is the habit I have developed, and the feeling that I am missing something profound if a day goes by and I don’t practice at least a few minutes. I try to get to a class now and then which forces me into an hour or more of deep, sweaty, and perhaps out of the ordinary, moves and exercises. It also maintains a connection to other teachers and students in the area.

The important thing about yoga is that it become a part of our lives, every day, every encounter with people or situations, every quiet moment of repose and reflection, every deep, rib-expanding breath. Ten minutes of breathing every morning, or twenty minutes of yoga poses and breathing a few times a week, will have a great impact on our health and happiness. So, right here, right now, sit with your spine vertical. Relax your shoulders. Take a deep, long inhale that expands your abdomen and ribs. Exhale slowly and completely. Draw your shoulder blades closer together. Move your shoulders far away from your ears. See, now you have a home practice.