Is The Queer Community "Recruiting" Kids? 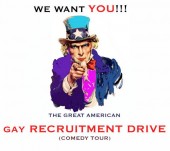 The Gallup organization recently released some interesting survey findings.   They questioned 120,000 people, asking: ‘Do you, personally, identify as lesbian, gay, bisexual or transgender?’  Never before have this many Americans (120,000 to be exact) been polled about their sexual orientation (by comparison, the highly regarded NORC survey done by University of Chicago asked 2,000 people).

Gallup's findings are fascinating, and disrupt some of the common stereotypical assumptions about the LGBTQ community.  3.4% answered ‘yes,’  92.2% answered ‘no,’ and 4.4% said they didn’t know, or refused to answer. It’s crucial to note that the 3.4% represent people who are willing to publicly declare their queerness to a pollster, and that this number is  far smaller than:
The amount of people who identify this way but won’t declare it, which in turn is less than
The amount of people who live an LGBT life but don’t self-identify as such, which is less than
The amount of people who experience LGBT attractions and inclinations but never act on them
Basically, a rather significant minority of people are at least a little bit ‘queer,’ and 3.4% probably under-represents the actual queer community. 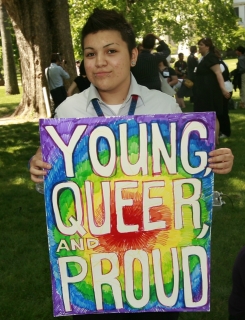 What these stats do reveal is a dramatic difference by AGE and, to some extent, gender. 6.4% of 18 to 29 year olds identified as LGBT, compared to 1.9% of those 65 or older. And a whopping 8.3% of 18-29 year old women identified as queer.
So, something is clearly going on here.  Either people stop being queer with age or there are obvious differences among generations.  No surprise here: as queer people are embraced more and more by mainstream society, more people feel safe to self-identify as queer.

So, we’re recruiting the young? Not so much. More accurately, our culture is starting to real provide a space for LGBT people to live authentic, public lives.  If the number of LGBTQ-identified people increases, as it sure is likely to do, it will not be the result of indoctrination.  What it would actually indicate is the number of LGBTQ people not openly identifying as such.

Other findings from the poll defy many previous survey findings about this topic.  Gallup found the rates of LGBT identification to be higher in less educated, lower income, and minority respondents, whereas older studies always revealed the opposite.  It’s intriguing to wonder why, and I hope to write an article on that in the near future.  The rates of motherhood among lesbian and heterosexual women are now identical, another statistic probably attributable to increasing social acceptance.

It's the generational number that have me excited, though.  I have a vague feeling of a revolution on the rise, a cultural revolution of gender and sexuality that is starting as a wave of queer young people, led by women, and will eventually transform the way we look at these dimensions now.