At this point, John Gottman’s research from a few years ago comparing gay and straight couples is pretty well known. Gottman, a well- respected psychologist and researcher, conducted a study of gay relationships, basically showing that (most) same and mixed sex couples displayed like levels of relationship satisfaction, similar problems, and dealt with relationship highs and lows in the same ways.  The study highlighted some differences, as well: same sex couples were more optimistic when faced with conflict, more often utilized affection and humor during disagreements, and employed fewer hostile and controlling emotional tactics. Those are not minor findings!
This all seems to be people's main focus when it comes to the Gottman study, which is a shame. If you look carefully, there’s way more to analyze and discuss, something I intend to do in this piece, also adding observations of my own. 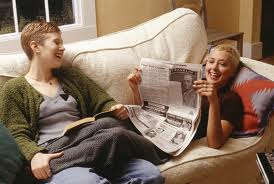 In addition to the above widely reported findings, Gottman also found that “gay and lesbian partners displayed less belligerence, domineering, and fear tactics with each other than straight couples do……fairness and power-sharing between the partners is more important and more common in gay and lesbian relationships than in straight ones.”

That is incredibly powerful!  What might have resulted in these findings?  For starters, same sex couples benefit from automatic gender equality between the two partners and similarity of bodies and acculturation.   For gay/lesbian couples, the two partners, whether they were socialized through male or female norms and expectations, were presented  the same messages about gender.  Neither would be likely to make the assumption that they ‘ought’ to be dominant or submissive to their partner. In short, traditional sexist roles do not exist in same sex relationships.  Gottman’s finding suggests that differently gendered partners might still be struggling with effects of living in a patriarchal society.

Obviously same sex partners still have power struggles sometimes. Obviously some of these relationships are not founded in equality.  But they're not starting from the place of an ‘automatic’ power differential, something inherent in differently gendered couples. No one believes he should be in charge of the relationships or that her role is to submit.  No one who feels that housework is her responsibility, even if she works, and no one who doesn’t even concern themselves with daily household chores.

Further more, in same gender couples, no one automatically assumes it's their job to stay home and raise the couple's children, and nobody who thinks they're basically not responsible for any of the childcare.  On top of that, there's also no partner who simply assumes she is entitled to be a stay at home parent, and no spouse who then feels he must shoulder his family's financial burden solo. To my knowledge, neither Gottman nor anyone else has connected his findings to traditional gender roles in relationships. The belligerence, domineering, and fear tactics could certainly indicate a dissatisfaction with partnerships that don’t ‘value fairness and power-sharing.’  Is it possible that these roles PRODUCE the unhealthy couple interactions?  I think it would be of great merit to investigate this.

Gottman also detailed differences between male/male and female/female couples,differences that reveal something to us about gender, as well.  Lesbians were more emotionally expressive with both positive and negative emotions, not entirely surprising based on our understanding of stereotypical behavior from women.  More surprising, though, was the finding that gay men whose were attacked by partners during a time of conflict showed greater difficulty recovering from the negatives, and ‘repair’ attempts were stymied.  Gottman suggests that gay men may need ‘extra help’ to offset this negativity – is this perhaps because in mixed gender relationships the woman plays a larger role in repair than the man, making it less necessary for her mate to recover quickly? This is worth investigating; it has implications for couples therapy, among other things. Gottman’s research, interesting and significant, only scratches the surface of the differences between couples, differences from which we can learn a great deal. For example, 40 to 50% of gay male couples are nonmonogamous, and open relationships are way more common among lesbian and bisexual women than in the heterosexual world.  Kinkiness is way more common among gays and lesbians as well.   It could be that the genetic combinations that predispose one to queerness also predispose towards other forms of variant sexuality. Or it might be that once you break down cultural taboos about one aspect of sex, other taboos become easier to transgress.  If straight folks follow the lead of gay people, those who are repressing their sexual desires might develop the courage to be more honest with themselves and partners. That could result in fewer people cheating and fewer doomed to sexual incompatibility within their relationships.

Gottman is only the tip of the iceberg when it comes to difference.  Gay men and lesbians tend to be rather different from each other when it comes to sex. They ‘do’ sex differently (and not just in the obvious ways), which could reveal information about male-female sexual differences.  LGB folks tend to stay friends with their ‘exes’ much more frequently than straight people, even when there are no children involved, something that could significantly lend to building and/or maintaining a healthy family unit after a break up.

The list is long, too long to do justice to in one blog post.  Here’s hoping other researchers follow Gottman’s lead.  For myself, this is a topic I’ll be blogging about frequently in the future.