The Growth Of Trans Visibility 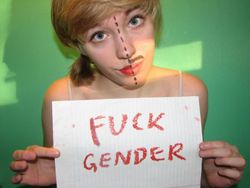 Lots of folks are puzzled and surprised by what appears to be a sudden explosion of people who identify as transgender, genderqueer, gender fluid, or something else that is not traditionally ‘male’ or ‘female.’ Even for LGB individuals, this all seems to have happened in the blink of an eye. So let’s look at exactly just what has been happening here.

Looking back at the 70’s and 80’s, standard belief was that sexual orientation and gender identity were completely unrelated things. The gender binary (the idea that there are two distinct and biologically determined sexes aka male and female) was unquestioned. ‘Transsexuals,’ what trans folks were referred to, were nature’s mistakes, a female brain trapped in a male body, and female to male transsexuals were thought to be rare. ‘MtF’ transsexuals, those individuals assigned male at birth but claiming a female identity, yearned to be perceived as women and to fit into mainstream heterosexual society; many sought to achieve this by ‘going stealth,' which meant keeping their history of being assigned male at birth a secret. They rejected and similarly were rejected by the newly emerging gay community. Simultaneously, the gay male community embraced the male macho ideal, resulting in the marginalization of drag queens and 'sissy men.'  Lesbians were more accepting of ‘dykes’ or ‘butches,’ those who did not fit in with heteronormative female ideals, but remained suspicious of anyone who presented as ‘too’ male. ‘Transsexualism’ and same sex sexual orientation seemed as far apart as one could fathom.

With the 90's, we saw some changes. In the past twenty years, there was a great increase in ‘butch’ lesbians identifying as female to male transsexuals.  Even today, most ‘FtM’s’ go through a period of identifying as gay women before solidly identifying as trans.  Many of these FtM individuals choose to remain within the lesbian community post-transition, something most lesbians have come to accept. Cross-dressers, assigned male at birth, attracted to women, who live part time as women) began to go to another level. Increasingly, some move to a full-time female identification and ‘transition,’ meaning taking feminizing hormones, undergoing gender reassignment surgery, and living as women.  Post-transition, many retain their attraction to women and enter into same-sex relationships. Increasingly they are accepted by and integrated into the lesbian world.  Gay men are having a change of heart as well: some trans men are discovering post-transition that they are attracted to other men, situating themselves within the gay male community.

The addition of the ‘T’ to the LGB acronym has produced an interesting change in the LGBTQ community, something some social scientists call ‘intersectionality.’ A widespread questioning of the gender binary has developed, along with a recognition that sexual orientation and gender identity can’t be neatly separated.  This new outlook is especially prevalent among younger ‘queers,’ many of whom refuse to self-label, or who choose idiosyncratic labels.  Beemyn and Rankin, whose book ‘The Lives of Transgender People’ came out in 2011, found that their subjects chose no fewer than 103 separate, distinct ways to describe themselves, demonstrating a widespread kind of ‘gender blending’ or ‘gender fluidity.' Here's an example: 'I may feel ‘mostly’ female, but some days I’m more  ‘butch,’ and my gender expression and behavior is different at different times.' Another example could be throwing out the concept of gender entirely..

Mainstream culture is shifting too.  Transgender people, aided by the Internet in the 1990’s, formed coalitions and lobbied for recognition, acceptance, and legal change. The transactivist movement has had a good deal of success, resulting in law changes on all levels.  Trans people have become increasingly visible (think Chaz Bono) and this visibility encourages young people to ‘come out.’ At the same time, the children of the Baby Boomers, raised on feminism and ‘Free To Be You and Me,’ have supported a wider range of gender expression in their own children.  Parents who twenty years ago might have taken a little boy who played with dolls to a shrink now just simply buy him the Barbie he desires. And the kids who might have suppressed their gender nonconforming identities until middle age have begun to express them by adolescence.

Are there more transgender people now than thirty years ago?  Maybe. But it could also be that they are just identifying as trans younger and feeling freer to live their inner experiences outwardly.