Politics and Personalities take over Marriage Equality in New Jersey...WHY? 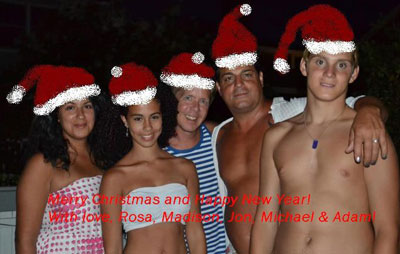 Iâve been fighting for gay couples like me for a long timeâ¦..how long?  Well letâs just say Adam celebrated his 17th birthday this past September, so that makes it a very long time.  In 1997 when we won the right for unmarried couples to jointly adopt children it made New Jersey the first state in the nation to grant gay/lesbian couples equality in the area of adoption.  So to have other states grant their gay/lesbian couples marriage equality, while New Jersey still âdebatesâ it, to me is disgusting.

Years ago, while the kids were still young and Adam had not been diagnosed on the Autistic Spectrum we did a lot of advocating all over the country, hell we even wrote a book about ourselves and our struggle to adopt.  The book titled âAn American Familyâ was an insight to two gay men and what made them tick, flaws and all.  We were and still do expose ourselves, like lab rats to those that would condemn us and hold back that brass ring of marriage equality.  We needed and still need them to see that we have more in common than less, and that is our humanity and dignity.  We still hope to change minds through Love because we believe, as did Dr. Martin Luther King Jr.  âJustice at itâs best is love correcting everything that stands against loveâ.

Justice is what we seek, no more or no less.  Michael  Galluccio, my California Husband, said it best âLove is what makes a family. It is not what you are but who you are.â  The LGBT community should not be denied the right to marriage equality because of what we are and we should be given freely the right to marriage equality because of who we are.  We are citizens of New Jersey, not better or worse, but equal to our heterosexual family, friends and neighbors.

In 2006, it was the State Supreme Court of New Jersey that recognized our humanity and dignity and declared that we should be treated equally but then, disgracefully denied marriage equality and allowed our Legislators to invent Civil Unions as our water fountain for marriage rights.

God has come up quite fervently in this discussion from those deniers of equality but Susan B. Anthony speaks for me when she said âI distrust those people who know so well what God wants them to do, because I notice it always coincides with their own desiresâ  I have been quoted as saying âThere was no one willing to stand up and do the right thing for our child until it got to courtâ but I canât say that this time.

My humanity, my dignity, in fact the humanity and dignity of my entire community of LGBT brothers and sisters has been and is still being kicked around due to politics and personalities that do not speak to our love, to our humanity, to our dignity.  Itâs their career, their photo op, their quote that seems to trump thousands of New Jersey citizens.  Good people by and large, maybe even great.  Isnât it time to challenge the politics and personalities that have fumbled our equality so badly that even at the end of 2012 we still stand with our hearts and hands out left empty.  It is not Republicans or Democrats, it is not the Assembly or the Senate of New Jersey but both houses that should be held responsible and not just by the denied, not just by our brothers and sisters but by our family, our neighbors, our teachers, our students, our employers, our employees, our clergy, our unionsâ¦â¦.in short all the people of New Jersey should stand as one and shout it from the mountain tops that Marriage Equality must come to New Jersey and it must come NOW!

Mind you, I don't thing YOU are disgusting. But when people accept the notion that our rights are "granted" to us, I feel disgust.