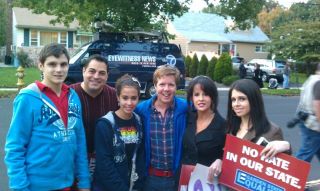 Michael and I began this crazy parenting journey back in 1994. Childless, with just the spark of a possibility, we took our first step towards making a family of our own.  It began with us, with a tremendous amount of self discovery.  For me anyway, it was really the year I grew up.  I put down the bottle, faced my past, saw my true reality and holding onto Michael for dear life started planning our future together.

There were many steps along the wayâ¦.thousands.....ok tens of thousands, well there have been a lot and way too many to address right now because for me, for this story, I just want to zero in on a moment in time.  One moment from last night, but, before I go there I must take a detour.

Iâve shared before about another moment in time, a warm June evening this year. When the Galluccio family sat together at Madisonâs 8th grade graduation listened to this:

"The Humanitarian Award is given to the student, who consistently exhibits genuine acts of kindness, compassion and concern for everyone.  This award is presented to (wait for it!) Madison Galluccio"

We, of course, weâre thrilled for her, for us, for life.  It was validating for us in many ways but for Madison, I think it was the push, the straw, the ounce of courage she needed to shed her pubescent insecurities and truly begin her journey towards adulthood.  Just like our journey can be measured in thousands of steps, Madison is just starting hers.

Last year, terrified and crying, she testified in Trenton for marriage equality.

Last month, she started high school and was a wreak but immediately began reaching out to teachers and friends to start a Gay Straight Alliance as she was distraught that none existed.

Oct. 8th, she joined Garden State Equalityâs youth cause and attended an Anti Bullying Training event with 6 of her friends.

Oct. 9th, cheered and celebrated, she stood center stage in front of a thousand or so people at Hudson Pride and delivered her own speech in which she asked the crowd, âIf you saw a 14 year old girl on the street who needed help, would you help her?â The crowd responded in cheers âYES!â She asked again and they roared âYES!!â and then she said it âWell Iâm 14 and I need your helpâ.  When she was finished delivering her speech I heard someone yell âMadison for President!â

The paths we choose in life vary in speed but my daughter is on the fast track.  As her parents, Michael and I have always known that Madison is going to be a force to be reckoned with. Since her earliest days she has been a shining star.  Sure she is beautiful, has incredibly hair and a smile that could melt a snowman, but her brilliant shine comes from within and it always has.

As her parents, we are fortunate enough to know what it is like to be on the fast track.  After all, how many couples can make a family that consists of three children, a son-in-law and three granddaughters in just 16 years.  So we get it and the fast track can be a rough ride.

Ok, now Iâm getting to the moment I really want to share.

Last night, we (Michael, Adam, Madison and I) drove down to protest at Union High School.  Madison having attended another GSE event the night before and just finding out that her school board is meeting this Thursday to vote to implement the GSA she wants so badly was very excited but very tired.  Sometimes, as parents, our children donât have to say anything to us, we feel, we know, our children need protection. We had that sense last night.  So even though we, along with our children, have been front and center at so many different events âfor the cause of equalityâ last night we held back.  We held our children back.  We held Madison back.

It was a tug of war at times with the rising activist and her protective parents.  Emotional and weary she was drawn to the center, pulled this way and that and we were not comfortable. Thereâs no doubt had we let her go her own way she would have been ambushed by the media. Remember weâre experienced at that too.  But at this time, this night, she was too exhausted and as we were stepping in to pull her out of center stage, a reporter got to her first and pulled her to the side.  Ok sheâs out of that crowd, one way or another and then I hovered over my girl as she gave her interview.

Sucking it up, she spoke eloquently, succinctly and summed up an entire civil rights movement. As she began breaking down she said;

Then I swooped in and held her, loved her. This is the moment!

JON HOLDEN GALLUCCIO, AUTHOR OF âAN AMERICAN FAMILYâ WITH MICHAEL GALLUCCIO AND DAVID GROFF, IS A FINANCIAL SERVICES REPRESENTATIVE WITH METLIFE. HE RESIDES WITH MICHAEL AND TWO OF THEIR CHILDREN IN NORTH HALEDON.  HE CAN BE CONTACTED AT WWW.GALLUCCIO.COM