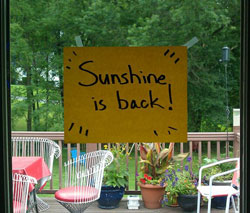 Arriving at Camp Merry Heart, we are greeted by group of counselors including Amy.  Amy, Adam's young blonde Australian counselor, told us to wait and she would go get Adam.  Having a arrived at 1pm on the dot for pick up, not all the campers were ready to leave and Adam was still hanging in his cabin with his friends.

Within minutes Adam appeared with Amy and Reece (another counselor, this one from England).  There we stood Michael and I with Madison in between us.  As they came down the path it occurred to me that Adam would have to choose who he would go to first.  I felt for him and then I felt for Michael. So in my head I began chatting âgo to Michael, go to Michaelâ when all of a sudden he bolted forward through his arms out in the air, reached and picked up Madison. My heart beat faster and the tears welled up.  I was so moved and so happy for both of them and then for us.  All parents want their kids to get along but this display of love was so genuine and beautifulâ¦.a parentâs dream come true.

In a few I was back in my head a little dismayed that I didnât even see Madison as a choice.  I was so wrapped up in âparent modeâ that I couldnât see the âforest through the treesâ.  I am secure in Adamâs love for me so I wanted him to shower Michael over me.  I am usually very aware of all the players in my family, their presence, their needs etc.  I am the consummate juggler making sure everyone is taken care of.  This welcoming taught me how lucky I am to have a family full of jugglers.  I may be the consummate juggler but all the members of my family have decided to juggle the needs of one another along with their own.  14 year old girls are full of insecurities and Adam made sure that his sister knew where she stood with him.  To be able to see just how much they meant to one another at that moment in time is priceless and something I will always treasure.

Adamâs week away at camp has had a profound effect on all of us here in the Galluccio Family.  As we drove away last week, Michael had stated âI hope he learns to appreciate his parents while heâs at campâ and within minutes, in the Adamless silence of the car, Michael restated âI think I had it wrong, weâre going to appreciate Adam more while heâs gone.â So Michael nailed it, we did learn so much and most of all have learned to appreciate the role, the positive role, Adam has in all of our lives.

So as we drove away from camp Adam was reunited with his Ipod and the singing (the constant singing!) began and he has never sounded better! Welcome home Sunshine!

JON HOLDEN GALLUCCIO, AUTHOR OF âAN AMERICAN FAMILYâ WITH MICHAEL GALLUCCIO AND DAVID GROFF, IS A FINANCIAL SERVICES REPRESENTATIVE WITH METLIFE. HE RESIDES WITH MICHAEL AND TWO OF THEIR CHILDREN IN NORTH HALEDON.  HE CAN BE CONTACTED AT WWW.GALLUCCIO.COM