Adam Wants to be a Rapper! 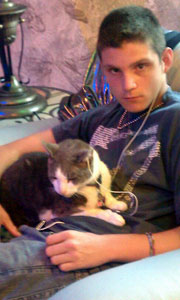 Adam wants to be a rapper!

Adam says â I can say nigger and bitch when I rap right?â

âOMG, NO and you know I hate that word!â I reply.

So that is how my 10 minute commute to Adamâs basketball camp began this morning.  Clearly I will remember to have 2 cups of coffee before getting in the car with him again!

I wanted to share that because spectrum kids seem to have a more difficult time with language and Iâm hoping I can shed some light here because it is becoming more or a challenge.

The other evening at dinner with my in-laws, my mother in-law said âBoy are they milking her for all sheâs worth!â  Adam exclaimed âWhat?!? They are MILKING HER?? Why?â  Of course itâs hard not to explode into a roar of laughter but when we did settle down, once again we were explaining to Adam what the âsillyâ expression actually meant.

Sitting at a restaurant in Little Italy with a friend visiting from California, Adam leans in to hear what Paul is asking him.  âRate those girls at the other table, 1, 2 3â said Paul âWhat?â âRate themâ he repeated.  Adam looked at me horrified and said âDad he wants me to RAPE those girls, tell him no!â

So even if an expression is clear, if it doesnât make sense Adam will change it up to make sense.  He didnât understand what ârate those girlsâ meant but he did understand when he changed the t to a p.

Now that Adam is getting older, 16 next month!, he is becoming more independent.  Heâs craving more independence than he actually gets but that will change.  I wonder though how many things Adam hears that just donât make any sense and what would it be like if I wandered the world like that.  After all itâs the same world out there but the way he needs to negotiate it is so vastly different from how I do.

I will never completely âget itâ but Iâm on my way to understanding just what it is he goes through. I have to remember that âhis eyesâ see things differently than mine and just because heâs Autistic, because heâs an individual.  The lessons I learn from Adam everyday help me to be a better person because they apply to all of us.

I will leave you with this one.  For years Adam has had a hard time with whatâs real and what isnât.  We have told him thousands of times that what you see on TV isnât realâ¦â¦now he wantâs us to explain the Kardashians because âtheyâre real and theyâre on TV!â My reply âThe Kardashians donât count!â

JON HOLDEN GALLUCCIO, AUTHOR OF âAN AMERICAN FAMILYâ WITH MICHAEL GALLUCCIO AND DAVID GROFF, IS A FINANCIAL SERVICES REPRESENTATIVE WITH METLIFE. HE RESIDES WITH MICHAEL AND TWO OF THEIR CHILDREN IN NORTH HALEDON.