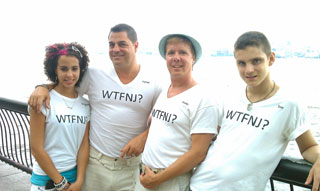 summer Sunday, we had the opportunity to attend a rally in Hoboken sponsored by Garden State Equality and Lambda Legal to raise our voices in protest.  For as our brothers and sisters were getting legally married across the river on that gorgeous summer day, we here in New Jersey are still denied the right to marry.  So we asked, âWhereâs the Freedom?â or just âWTF?â

Lambda was there to announce their latest lawsuit âGarden State Equality vs. the State of NJâ¦.â But WHY DOES THERE HAVE TO BE ANOTHER LAWSUIT?  Didnât the Supreme Court of NJ already rule in favor of equality.  Of course they did, but they left it in the hands of cowards to enact it and so instead of marriage equality we got Civil Unions.  So even though most of the legislators will admit that civil unions did not bring marriage equality to the lgbt community we still have to fight and file a lawsuit to get it changed.

Now, if the Supreme Court of NJ told me to do something and I didnât, wouldnât that be a violation and wouldnât I be charged, held responsible in some manner?  Why canât we make a citizenâs arrest of all of those in Trenton that ignored the Supreme Court the first time around?  I canât imagine breaking the law and so easily getting away with it but isnât that exactly what happened here and continues each and every day we donât have marriage equality.  Maybe if we just held each and every one of them responsible for their actions things might change a little quicker down in Trenton.

My kids get it and itâs all about freedom.  We, the lgbt community, are not free.  We are not protected, we are second class.  My daughter saw this last year and asked if she could stop saying the Pledge of Allegiance because âfreedom and liberty for allâ was a lie.  We said yes as we donât say it ourselves (we can talk about this another time).  Whatâs important here is that why is it taking so long and costing so much when we all know that eventually we will have the freedom to marry but until then Iâll just scratch my head and ask WTF?

JON HOLDEN GALLUCCIO, AUTHOR OF âAN AMERICAN FAMILYâ WITH MICHAEL GALLUCCIO AND DAVID GROFF, IS A FINANCIAL SERVICES REPRESENTATIVE WITH METLIFE. HE RESIDES WITH MICHAEL AND TWO OF THEIR CHILDREN IN NORTH HALEDON.