The Axis of Awesome ~ "4 Chords" : Bringing The Funny

They call themselves The Axis of Awesome: That's a big glaring clue right there, right? 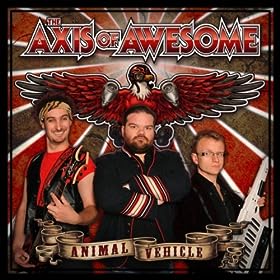 The easy comparisons are to Jack Black and Kyle Gass as Tenacious D (the Hard Rock tributaries/parodists), for lovingly skewering every strand of Pop they too can lay their hands on, or to New Zealanders Bret McKenzie and Jemaine Clement, better known as Flight of the Conchords (from HBO's "The Flight of the Conchords"), for being similarly funny musical Aussies.

The Axis of Awesome's "4 Chords" has been a viral video for months.

What can I say to introduce "4 Chords"? As little as possible. It's a song about 4 Chords. Go! Hear it now. It's track 14 (That's right, buried at 14!) streaming here until the end of this weekend. Also, it's an easy enough search for "The Axis of Awesome 4 chords" at YouTube -- that search will appear fast (before you finish typing it) in a list of choices, and will bring up dozens of videos: I'd go with one called The Axis of Awesome : 4 Chords (Live) posted by Cataphract, but explore for yourself. (Then, after you're done with "4 Chords", take a pass at "Birdplane" back at the AOL stream (track 4 - you'll understand why it's better to hear "Birdplane" second IF you listen to "4 Chords" first) and track 2 as well. Might as well shuffle them all together all at once. Although I can't recommend the entire album**, I'm happy to direct your attention to the best stuff, and point your way past the hazards.)

SPOILER WARNING: PLEASE DON'T READ THIS NEXT PART UNTIL AFTER YOU'VE HEARD

Everybody back? Alright, Settle down! Keep the giggling to a minimum!

It's a semi-brilliant bit of tour-de-force, isn't it?

Kinda breathtaking to hear all those songs piled up one on top of the next. It helps that they're all placed in the same key, of course, but I love that "4 Chords" gleefully skewers without prejudice, slicing through a swath of genres, and takes the wind out of all of those songs' respective sails â even the songs I love. Especially the songs I love! It's one chunk of overwrought seriousness relentlessly rendered ineffective one after another, must-avoid songs plunked down next to "Damn!, I *love* that song!" songs.

The album Animal Vehicle may not be a sighting of the future of rock comedy, but it contains a name-making schtick that, once experienced, will stick with you. Forever after, when you hear a pop hit, you'll think to ask yourself whether it has the formula 4 Chords.

**Warning Regarding Your Enjoyment Of Other Tracks On The Album: As is true about most "comedy albums", your mileage may vary.