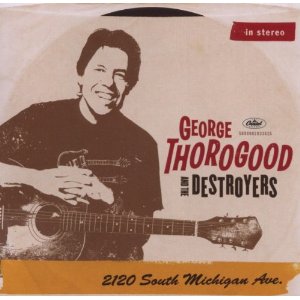 It has been over 30 years since Thorogood's second album forced its way anachronistically onto late 1970s radios. His latest isn't the blast of take-no-prisoners ground-staking "Move It On Over" (and its predecessor) was. This one hangs around 2120 South Michigan Ave, once home of Chess Records in Chicago. But it's a worthy set for the dedicated electric bluesman to unleash on fans and casual followers alike. His takes on blues standards are solid, reviving and re-masculating already meaty tracks such as "High Heel Sneakers" and "Spoonful".  For an album that's a tribute from start to finish, that lifts riffs unapologetically, that borrows freely from his heroes' inventions, small changes refreshen these songs in surprising ways. For instance, "Bo Diddley" arrives with a high-toned bongo popping in cahoots with the rhythm of the tom-tom, and growly reverb specifically assigned to some instruments adds a familiar but distinctive otherworldly atmosphere.

In fact 2120 South Michigan Avenue is so well-engineered it earns a phrase among those reserved for my highest praises: It doesn't draw attention to itself. If young ears now are anything like mine were, they take for granted that music is superbly well recorded (or that "lo-fi" is used for effect). A kind of muddiness was a constant characteristic of old Blues records; even revivals of the 70s and 80s sometimes chose to include some unseparated muddled sounds to evoke previous eras, even though by then it was easy enough to avoid. On 2120 South Michigan Avenue, every instrument is crystal clear, each is placed authoritatively in audio space, volumes are carefully balanced. This kind of attention to detail, the kind that is routinely taken for granted by young and old alike (â the kind that too often is not applied or abandoned on too many current albums where "experiment" is a euphemism for "inexperienced amateur" â) makes a huge difference in the enjoyment of sounds that depend on hundreds of unwritten variations and variables per song to express oneself, to provide heat and energy and passion.

Thorogood frames the album with two OK originals, title track "2120 South Michigan Avenue" and "Going Back" (listen for the guitar squeal that pans across the stereo channels). Unfortunately they're just as needlessly nostalgic as they sound. And with "Going Back"'s line "Back when the Blues was king", his well-intentioned, authentic passion tips into inauthentic historical revisionism. But that's the only false note on a sizzling hot summer album.